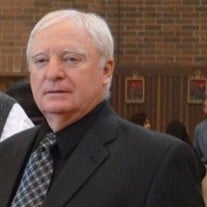 PRINCETON - Edwin Richard Marquis, 75, passed away in the early hours of Monday, November 29, 2021 at OSF St. Clare in Princeton, IL surrounded by his loved ones. Edwin, also known as Ed, Dick and Beeper (a name given to him by coworkers) was born in Princeton, IL on December 4, 1945 to the late Richard and Marian (Strait) Marquis. He was a graduate of Western High School in Buda, IL, Class of 1965. Dick joined the United States Army and served from 1965 to 1967, when he was honorably discharged. He met his wife of forty-nine plus years, Patricia "Pat" VanCauwenberge while she was home visiting family from college. They married on July 1, 1972 at the First United Church of Christ. They settled in Princeton and raised two sons, Tim and Dan. He was a member of the Steel Workers Union for forty-one years, starting his career at J & L Steel, which was later bought out by LTV Steel and then by Mittal Steel, which he retired from in 2010 after forty-one years of service. Dick loved spending time with his family. He enjoyed fishing and the relaxation of it. Teaching his sons and granddaughter (her Bampa) (a.k.a. the apple of his eye) Bella to fish, was something he was very proud of. You wouldn't catch him very often without his trusty four-legged companion, his yellow lab, Callie. He loved the Chicago Bears, win, struggle or lose. He really loved watching college football. He made it to the Indianapolis 500 a few times with his brother and father. His greatest joy in life in recent years was helping his boys and wife build a family produce business in Sheffield, Mill Road Farms. He loved sharing his knowledge of "farming," which he learned as a young boy when his father farmed. Many times he was seen in the field getting the ground ready for planting in the spring, mowing throughout the summer and then getting the ground ready for fall as the last harvests were taken out of the fields. He was the quiet "get-this done" member of the family. He was a family man and a man that didn't require a lot, as long as Pat, the boys, Bella, and Callie were happy, that's all that really mattered to him. He was always there for others and will be greatly missed. He is survived by his wife and partner of almost 50 years, Pat Marquis of Princeton, IL; two sons, Tim Marquis of Granville, IL and Daniel Marquis of Lake Zurich, IL; one granddaughter, Isabella "Bella" Marquis; two siblings, a sister, Mary Forth and one brother, Merrill (Cheryl) Marquis; one sister-in-law, Pam (Bill) Bennett; a brother-in-law, Jim (Vicky) VanCauwenberge; as well as many nieces, nephews and cousins; and his four-legged love, Callie. Preceded in death by his grandparents, his parents, Richard and Marian Marquis, two sisters, Shelby Mechling, Velma Marquis, a twin sister who died at birth, a nephew, Gary Forth, two brothers-in-law, Dwaine Mechling and Mel Forth, and his mother and father-in-law, Gene and Marcia VanCauwenberge. In lieu of flowers, memorials may be directed to the American Heart Association. or donor's choice. A visitation will be held on Friday, December 3, 2021 from 10:00 a.m. to 12:00 p.m. at the First United Church of Christ in Sheffield, IL. Services for Dick will be held at the First United Church of Christ, Sheffield, IL, at 12:00 p.m., officiated by Pastor Martin Nussbaum. Graveside services to follow at the Sheffield Cemetery in Sheffield, IL. Military rites will be accorded. Online memorials and condolences may be directed to www.norbergfh.com Arrangements by Norberg Memorial Home, Inc. & Monuments.

PRINCETON - Edwin Richard Marquis, 75, passed away in the early hours of Monday, November 29, 2021 at OSF St. Clare in Princeton, IL surrounded by his loved ones. Edwin, also known as Ed, Dick and Beeper (a name given to him by coworkers)... View Obituary & Service Information

The family of Edwin R Marquis created this Life Tributes page to make it easy to share your memories.

PRINCETON - Edwin Richard Marquis, 75, passed away in the early...

Send flowers to the Marquis family.