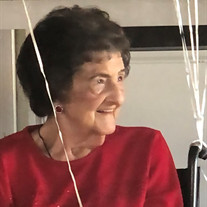 Princeton - Eileen R Miller, 94, passed away on Saturday, June 5, 2021 at Liberty Village in Princeton, IL at 1:36 a.m. Eileen was born on September 3, 1926 to the late Ralph and Charlotte (Lunn) Michael in Ottsville, IL. She graduated from... View Obituary & Service Information

The family of Eileen R Miller created this Life Tributes page to make it easy to share your memories.