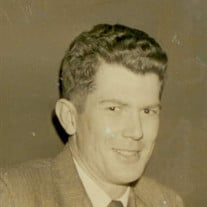 Conrad Swenson When Grandpa was a little boy, he would solve math equations off a blackboard to start each morning. For each wrong answer, more equations would follow until all of them were correct. Surely, his well-intentioned grandmother believed she was guiding this bright boy into a future as an engineer or a professor (for surely Grandpa was always clever). She could not have been more misguided! Every stroke of chalk on slate was torture – this was a boy born to walk the earth, hold it in his hands and feel it between his toes, to climb its summits. And that’s what he did. In his life, Grandpa was many things. He was a hunter, enjoying some of the finest duck and deer hunting in the country and bringing them home to his family. He was a fisherman, pulling catfish out of muddy waters and wild salmon from clear rivers in Alaska. He was a farmer, feeding his community with his sweat and soil. He climbed mountains, broke horses, felled trees, and planted saplings. He milled the steel that built our cities. He was a husband to his beloved wife for 63 years and, with her, was a father to his “wonderful children and grandchildren, and he loved each of them equally.” He was a fine specimen of manhood. E. Conrad Swenson, 89, of Princeton died restfully in his home Friday, January 6, 2017 (his first name was Einer – he never cared for it). He was born August 16, 1927 in Champaign, IL, son to Einer and Florence (Miller) Swenson. He married Sheila Welsh (an English teacher) on April 11, 1953. Conrad graduated from Woodruff High School in Peoria, IL in 1945, and he served in the US Army from 1945-1946. He was a farmer for 13 years, and his tomatoes were a huge hit at the grocery store. He then was an electrician at LTV steel. After that, he just kept on living. He was a member of the Princeton Masonic Lodge #587 and the Optimist Club. He was a longtime volunteer with the Bureau County Historical Society, and he was an award-winning photographer. Conrad is survived by his wife Sheila; his daughter, Lorraine Oakes of Chicago and her husband John; his daughter-in-law, Debra Swenson of Oglesby; his granddaughter, Katie Nelson of Princeton, her husband Stefan, and their daughters Charlotte and Rosalie; his grandson, Eric Swenson of Rushville, his wife Corrie, and their sons Bill and Oliver. He is preceded in death by his son, Bill; his parents, Einer and Florence. He wasn’t the perfect father, but he showed his family a hundred times every day how to be a good one. A visitation will be held at 10a.m. Thursday Januray 12 at the Norberg Memorial Home in Princeton and will be followed by a funeral service at noon with Pastor Tom Schrock officiating. Afterward, a graveside service will be held at the Greenwood Cemetery in Bureau. Memorials may be sent to the Bureau County Historical Society Museum – 109 Park Ave W., Princeton, IL 61356. Online condolences may be left at norbergfh.com “Take it easy Old Timer”

Conrad Swenson When Grandpa was a little boy, he would solve math equations off a blackboard to start each morning. For each wrong answer, more equations would follow until all of them were correct. Surely, his well-intentioned grandmother... View Obituary & Service Information

The family of Einer "Conrad" Conrad Swenson created this Life Tributes page to make it easy to share your memories.

When Grandpa was a little boy, he would solve...

Send flowers to the Swenson family.