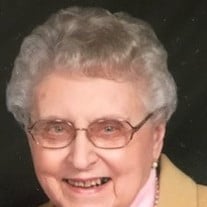 Princeton - Elaine Mae (Lundgren) Olds 93, passed away on Friday, December 18, 2020 at Liberty Village in Princeton, IL. Elaine was born on June 29, 1927 to the late Oscar and Nell (Wise) Lundgren in Princeton, IL. She was a graduate of Wyanet... View Obituary & Service Information

The family of Elaine M Olds created this Life Tributes page to make it easy to share your memories.

Send flowers to the Olds family.