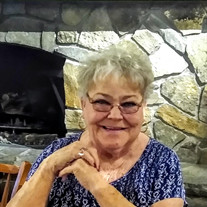 Phoenix, AZ – Elizabeth Anne “Betty Anne” McInnes 78 formerly of Princeton, IL. Passed away unexpectedly on Sunday, October 4, 2020 at John C. Lincoln Hospital in Phoenix, AZ. Betty Anne a.k.a. Booper or Betty Boop was born on September 3, 1942 in Princeton, IL to the late Alphonse and Avis (Spute) Latz. She was a 1960 graduate of Princeton High School. Betty Anne became engaged to Norman Dalton her senior year of high school and married shortly after graduation. They had three children together David, Danny and Suzie before they divorce. She later married Jim McInnes in 1983 at First Christian Church in Princeton, IL. She worked for Harold E Parr, Sr. Insurance Agency and then worked for the Bureau County Courthouse in the County Assessment office and was also the field representative in the Assessment office. She was a member of the Teamsters Union and eventually became the Union Steward for the Bureau County Courthouse. She was well known for working many years at the Ranch House and Yuvons. Working two jobs to support her family because for Betty Ann it wasn’t a choice. She retired in 2004 at the age of 63 after 31 years working for the Bureau County Courthouse. She loved antiquing to the point that she opened D&M Antiques with Lee Mavity. She worked; it was hard to have time for hobbies. She loved to travel and vacation when time allowed. Honestly, that time wasn’t often enough, so she worked, took care of her kids and shopped for antiques. She was a Chicago Bears, Cubs and Bulls fan. She was a snowbird for 15 years, spending time in the winter with her two sons in Phoenix, and her summers with her daughter in Princeton. Eventually moving fulltime to Arizona in December of 2018, because all her children were living in Arizona by then. It was well known that you don’t call and interrupt Betty Anne during her favorite shows, Young and the Restless, Bold and The Beautiful or any football game. She loved to cook and bake. She also played softball and was a toe dancer, and was in many performances at Princeton High School. She is survived by her three children; David (Patty) Dalton of Phoenix, AZ, Danny Dalton of Phoenix, AZ and Suzie Warren of Phoenix, AZ; two stepchildren, Debbie (Bob) DelGado of Deer Creek, IL, and Dawn (Gene) Croisant of Hollowawayville, IL; six grandchildren, Alanna Warren, Amanda Dalton, Summer Dalton, Lexie Delgado, Jordan Delgado and Zachary Croisant; one great grandchild, Paxton Warren; one brother Alan (Ann) Latz of McHenry, IL; as well as several nieces, nephews and cousins. Betty Anne is preceded in death by her parents Alphonse and Avis Latz and her husband Jim McInnes (2016). In lieu of flowers, memorials may be directed to the family for charitable distribution. A Celebration of Life will be held on Saturday, October 24, 2020 from 1:00 p.m. to 3:00 p.m. at Norberg Memorial Home, Inc. & Monuments, Princeton, IL. Private burial will be held at a later date and time. Online memorials and condolences may be left at www.norbergfh.com Arrangements by Norberg Memorial Home, Inc. & Monuments.

The family of Elizabeth Ann McInnes created this Life Tributes page to make it easy to share your memories.

Send flowers to the McInnes family.