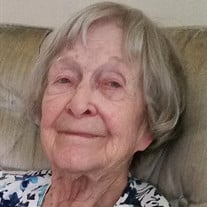 PRINCETON — Emma Rosalie (Weigand) Krase passed away peacefully on Wednesday, Feb. 21, 2018, five days before she would celebrate her 100th birthday. She was born Feb. 25, 1918, to Frank and Emma (DeMuynck) Weigand in Rock Island. She graduated from Rock Island High School in 1936, a mid-year honor student. Following high school, she attended Augustana College in Rock Island and St. Ambrose College in Davenport, Iowa, where she studied art. Watercolor was her favorite medium. She was active in the Turner Gymnastic Organization and YMCA Go Club, was a member of Modern Woodmen, worked in the supply division of the Rock Island Arsenal, and volunteered for the USO sketching the wounded soldiers at the Rock Island VA Hospital. In 1948 she met and married Robert Krase of Galesburg and lived in Galesburg, Alton and Betholto, where Robert worked for Illinois Power. In 1953 they moved to Princeton where they continued to reside for the rest of their lives. She was active in various positions in the First United Presbyterian Church and as a local leader, activity director and served on the board of directors of Camp Fire Girls. She is survived by three daughters, Carolyn (R.J.) Burns of Shelby, Mont., and Cheryl Krase and Kathy Krase of Princeton; two grandchildren, Emily (Andrew) Richards of Missoula, Mont., and Austin (Kendra) Burns of Havre, Mont.; and one great-grandson, Aeden Richards. She was preceded in death by her father and mother; three brothers Harry Weigand, Raymond (Jo) Weigand and Dr. James (Tally) Weigand; two sisters, Rachel (Max) Fisher and Therese (Richard) Meincke; and her husband, Robert (Bob) Krase. A celebration of her life will be at 11 a.m. Saturday, Feb. 24, at the First Presbyterian Church in Princeton with the Rev. Danie DeBeer officiating. Memorials may be made to the Memorial Fund, First United Presbyterian Church. The Norberg Memorial Home in Princeton is assisting the family.

PRINCETON &#8212; Emma Rosalie (Weigand) Krase passed away peacefully on Wednesday, Feb. 21, 2018, five days before she would celebrate her 100th birthday. She was born Feb. 25, 1918, to Frank and Emma (DeMuynck) Weigand in Rock Island. She... View Obituary & Service Information

The family of Emma Krase created this Life Tributes page to make it easy to share your memories.

Send flowers to the Krase family.