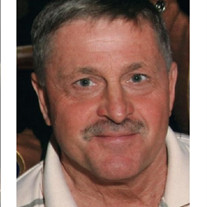 LaSalle – Ric Beach, 70, of LaSalle, IL passed away on Friday, April 3, 2020 at Good Samaritan Hospital in Downers Grove, IL, after losing his battle with leukemia. Ric was born Harold Eric Beach to the late Harold and Lois (Keefer) Beach in Pekin, IL on January 18, 1950. He married Jenny (Lophattananon) Beach on October 25, 2008 in Gatlinburg, TN. After graduating high school, Ric enlisted in the United States Marine Corps and served from 1970 to 1975. After his military service, Ric embarked on a long career in law enforcement, serving the communities of Lacon, DePue as Police Chief and later Ladd, IL. As a devoted and accomplished practitioner of martial arts, Ric opened his first Karate Studio in LaSalle County in the ‘80s. He expanded to Mendota, Ottawa, Princeton and Streator, owning and operating five dojos at one time. He was a Karate Master and held a seventh-degree black belt in the Okinawa Shuri-Ryu style of Karate. He also owned Life’s a Beach Tanning Salon in LaSalle, IL, several real estate properties across the state, and Sunset Pines Resort in Curtis, MI. Ric was a member of the Trias International Society, International Shuri-Ryu Association, and other honorary martial arts organizations. He loved karate and trained under Master Phillip Koeppel and Master Robert A. Trias, where he served as Trias’ Illinois State Representative for the United States Karate Association. He also represented the United States on his goodwill tours to the orient with Trias. Later, he returned to referee the World Championships in Okinawa, Japan in 1997. Ric also enjoyed a variety of other endeavors and encompassed the very definition of a life well lived. Ric loved working, no matter the job, and always gave 110%. He loved fishing, scuba diving, kick boxing, hunting, flying, going on cruises with his wife Jenny and traveling back to her homeland of Thailand. He loved to travel anywhere warm and spend time with his family. He was always willing to help others in any way he could and was very passionate about the Wounded Warriors Program. It was no secret that his heart & soul were most at home in sharing his love for Michigan’s Upper Peninsula. Ric is survived by his wife, Jenny (Natpiya Lophattananon) Beach of Utica, IL; four children, Eric (Linda) Beach of New Port Richey, FL, Jamie (John) Holovich of Locust Grove, GA, Jordan (Cody) Morgan of Princeton, IL, and Jacob (Alex) Beach of Bovey, MN; eight grandchildren, Payton, Noah, Kyla, Kaden, Raegan, Ryan, John and Andrew; two brothers, Ronald (Mary) Beach of Homosassa Springs, FL, and Rex (Catherine) Beach of Pekin, IL; his mother-in-law, Suda Lophattananon; one sister-in-law, Ksemanit Lophattananon; and one brother-in-law, Santi Lophattananon. Ric is preceded in death by his parents, Harold and Lois Beach. In lieu of flowers, memorials may be directed to the family for charitable distribution. Due to the COVID-19 pandemic, a private service for immediate family members will be held at 10:00 a.m. on Wednesday, April 8, 2020 at Norberg Memorial Home, Inc. & Monuments and officiated by Reverend Bob Henkelman. Services will be streamed live at: https://www.facebook.com/groups/Norbergmemorialhomememorialservicegroup/. This group will be open after 5 p.m. on Tuesday, April 7, 2020 to anyone who would like to join the services. A burial service will be held at a later date in Curtis, MI. Online condolences and memorials may be left at http://www.norbergfh.com Arrangements by Norberg Memorial Home, Inc. & Monuments.

The family of Ric Beach created this Life Tributes page to make it easy to share your memories.

Send flowers to the Beach family.