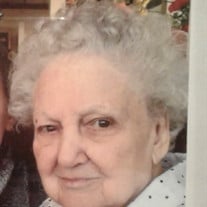 PRINCETON — Esther Marie Moloney (nee LaMontagne), 93, of Princeton passed away at 11:50 p.m. Wednesday, March 27, 2019, at Liberty Village in Princeton. Esther was born May 26, 1925, in Chicago to the late John and Theresa (Boettger) LaMontagne. She married the late Leo Francis Moloney on March 2, 1945, in Cook County. Esther spent her childhood in the Chicago area, graduating from Lindblom High School. After she married Leo, they lived in the suburbs until Leo retired in 1989. They moved to Bella Vista, Ark., where they lived until 2011 and then moved to Princeton. Esther loved playing cards and especially Yahtzee, enjoyed antiquing, sewing, playing the piano and spending time with family. She was a great homemaker and loved the outdoors, gardening, camping and boating. She had an outgoing, always can-do positive attitude and was loved by many who cared for her at Liberty Village and within the communities she lived. She is survived by six children, Patrick (Carolyn) Moloney of Orlando, Fla., Theresa Hennessy of Loda, Catherine Trowbridge of Princeton, Frances Hanley (Keith) of Norfolk Va., and Joseph and Edward Moloney of Bella Vista, Ark.; 17 grandchildren; and numerous great-grandchildren, nieces and nephews. She was preceded in death by her husband; her parents; four siblings, Dolores (Edward) Schuch, John (Barbara) LaMontagne, Phillip (Dorothy) LaMontagne and Theresa LaMontagne; a son, Daniel James Moloney; a grandson, Terrence Moloney; and a great-grandson, Terry Moloney Jr. Visitation will be from 10 a.m. to 11:45 a.m. Tuesday, April 2, 2019 at St. Louis Catholic Church, 616 S. Gosse Blvd., Princeton. A funeral Mass, officiated by Father Daniel Gifford, will follow at noon, and burial will be in Oakland Cemetery, 1013 Park Ave. West, Princeton. Arrangements are by Norberg Memorial Home, Inc. in Princeton. Online condolences may be left at www.norbergfh.com.

The family of Esther Marie Moloney created this Life Tributes page to make it easy to share your memories.

Send flowers to the Moloney family.