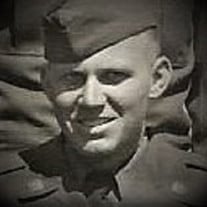 Malden – Ferris W. Wright, 89 of Malden, IL passed Wednesday, June 6, 2018 surrounded by family. Ferris Wilson Wright, born January 30, 1929, in Malden, IL to Fred and Celia (Wilson) Wright. He was a graduate of Malden High School and married the late Donna (Skinner) Wright on August 20, 1955. He was a lifelong railroad man at Burlington Northern Railroad retiring in 1990. He served our country fighting in the Korean War from 1951 – 1952 as a Staff Sargent in the United States Army. Ferris was a true blue LIFELONG BOSTON RED SOX FAN. He was also a member of the VFW, he enjoyed fishing, wood working and building model airplanes. He was also a volunteer firefighter in Malden, IL and a lifelong resident of Malden, IL. He is survived by two daughters; Ann Wright and Brenda Wright, one son, Ted (Janet) Wright, four grandchildren; Zach, Geoff, Nick and Becky and eight great grandchildren. One sister, Delores Karns and two brothers; Charles Wright and Max Wright and one sister-in-law, Nancy Wright. Ferris is preceded in death by his parents, wife, two brothers; Virden Wright and Buddy Grabill, one sister, Ruth Karns. Services will be held at Norberg Memorial Home in Princeton, IL on Thursday, June 14, 2018, 11:00 a.m. officiated by Reverend Brian Moore. A graveside service will follow at the Malden Cemetery. Visitation will be held at Norberg Memorial Home in Princeton, IL on Thursday, June 14, 2018 from 10:00 a.m. to 11:00 a.m. In lieu of flowers memorials may be directed to; Friends of Strays or Vitas Hospice. Online condolences may be left at www.norbergfh.com

The family of Ferris W Wright created this Life Tributes page to make it easy to share your memories.

Send flowers to the Wright family.