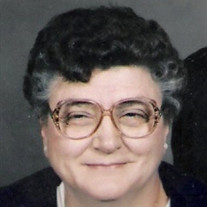 Wyanet - Flavia Marie (Caskey) Blanford, 74, of Wyanet passed away in her home on June 20, 2007 at 10:30 pm surrounded by her loving family. Flavia was born March 14, 1933 to Virden H. and Lillian M. (Hassler) Caskey at Swedish Covenant Hospital in Chicago. She married Thomas H. Blanford on June 2, 1951. He survives. Also surviving are four sons, Thomas Gerard “Jerry” (Susie) of Sheffield, Paul (Karen) of Dubois, Idaho, James (Lee) of Wyanet, Kevin of Wyanet; two daughters, Ann (Marvin) Fritz of Wyanet, and Catherine (Curt) Buchanan of Tiskilwa; nineteen grandchildren and five great-grandchildren. She was preceeded in death by her parents and twin brothers at birth. She was a devoted wife, mother, grandmother and great-grandmother who enjoyed crocheting afghans for all her children, grandchildren and for charitable organizations. She was an avid bingo player and enjoyed going to the riverboat with her friends. Flavia attended Wyanet Grade and Wyanet High School and graduated in 1951. She worked at Westclox, Harper Wyman, and also worked as a Nurses’ Aide at Prairie View Nursing Home, Perry Memorial Hospital, and Home Health Services in Princeton. She later worked in Central Supply at Perry Memorial Hospital and retired in 1994. She was a past member of St. Margaret Mary Altar & Rosary Society, and present member of St. Louis Catholic Church Altar & Rosary, Wyanet VFW Ladies Auxillary, Cub Scout Den Mother, Camp Fire Girl Leader. Flavia and Tom are both members of the Princeton Moose Lodge and were members of the Wyanet Old Car Club. She was a member of St. Louis Catholic Church in Princeton. A Mass of Christian Burial will be on Tuesday, June 26, 2007, at 10.:00 am at St. Louis Catholic Church in Princeton with Fr. Jeff Stirniman and Deacon John Murphy officiating. Visitation will be Monday, June 25, 2007, from 4 to 8 pm at Norberg Memorial Home. A rosary will be recited at 7:30 pm. Burial will be at Forest Hill Cemetery in Wyanet. Memorials may be directed to St. Louis Catholic Church in Princeton or Family Resource Center, 321 Main Street, Peoria, Illinois 61602.

Wyanet - Flavia Marie (Caskey) Blanford, 74, of Wyanet passed away in her home on June 20, 2007 at 10:30 pm surrounded by her loving family. Flavia was born March 14, 1933 to Virden H. and Lillian M. (Hassler) Caskey at Swedish Covenant... View Obituary & Service Information

The family of Flavia M. Blanford created this Life Tributes page to make it easy to share your memories.

Send flowers to the Blanford family.