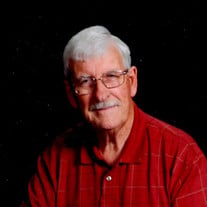 Princeton - Francis W. Cabral, 85, of Princeton, IL passed away on Sunday, January 16, 2022 at OSF St. Clare in Princeton, IL surrounded by his loving family. Francis, known as Fran by family and Frank by his friends, was born in Middleboro, Massachusetts on April 4, 1936 to the late Manual and Lindora (Norton) Cabral. He graduated from Memorial High School, Class of 1954. He met the love of his life while working as an insurance agent, as he was going door to door. He stopped at the right house. Lorrayne Sylvia answered and it was love at first sight. She had an idea he was going to be there, as she had talked to a fortune teller and was told she would meet someone in April. He asked her on a date that weekend, and they were together ever since. They married on December 7, 1963 in Seabrook, NH, they shared 58 plus years of love together before Fran passed. Frank was a life insurance salesman, a sales engineer at Mt. Hope Machinery Company in Taunton, MA. He and his family were transferred to Princeton, IL, then Ashland, OH, back to Princeton and then to Waukesha and Appleton Wisconsin before retirement. He and Lorrayne moved back to Princeton to be close to their children and grandchildren. He also served for several years as the chairman of the Finance and Endowment Committees at the First United Methodist Church. He enjoyed golfing, watching the Packers and Patriots football, making and collecting model trains, solving the world's problems and traveling. He and Lorrayne would travel to the Gulf Shores in Alabama in March and to Massachusetts in the fall to look at all the lovely fall colors. He was a member of the Big Apple Truth Table, a.k.a. coffee with the fellas, and loved spending time with his children, grandchildren, great grandchildren and bride. Frank is survived by his wife, Lorrayne Cabral of Princeton, IL; two daughters, daughter Vicki Cabral of Princeton, IL. and Debbie Sammons (Doug Howie of Genoa, IL; a sister Barbara Cabral of Middleboro, MA; two granddaughters, Rachel (Greg) Edens of Princeton, IL and Michelle (Trent) Munson of Tiskilwa, IL; two grandsons, Mathew (Michelle) Lawton and Ken (Lindsey) Davis; eight great grandchildren, Payton, Grant, Garret, Trevyn, Maycie, Gabriel, Jaxson and Cecelia. Preceded in death by one son, his parents, Manual and Lindora Cabral, two sisters, Margaret Cabral and JoAnne Cabral, and his son, Ken Sammons. Services for Fran will be held on Saturday, January 22, 2022 at the First United Methodist Church of Princeton, IL. at 11:00 a.m. Officiated by Pastor Ryan Sutton. The family did not want a visitation, but will be receiving friends at the church thirty minutes prior to services. Graveside services will be held at Oakland Cemetery on Saturday, January 22, 2022 at 12:00 p.m. cremation rites have been accorded. In lieu of flowers, memorials may be directed to the family for charitable distribution. Online condolences and memorials may be directed to www.norbergfh.com Arrangements by Norberg Memorial Home, Inc. & Monuments.

Princeton - Francis W. Cabral, 85, of Princeton, IL passed away on Sunday, January 16, 2022 at OSF St. Clare in Princeton, IL surrounded by his loving family. Francis, known as Fran by family and Frank by his friends, was born in Middleboro,... View Obituary & Service Information

The family of Francis William Cabral created this Life Tributes page to make it easy to share your memories.

Send flowers to the Cabral family.