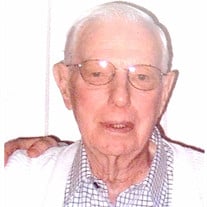 Princeton – Franklin T. White, 93, passed away on Monday, September 16, 2019 at Heartland Health Care in Henry, IL with his wife and daughter Kristie at his side. Frank was born on February 14, 1926 to the late Harry and Cecile (Garman) White in Osborn, Illinois. He was graduate of Tiskilwa High School and married Monafae Lucille White on January 6, 1945 in DePue, IL. He was part of the 82nd Airborn with the 504 regiment for the United States Army from 1944 to 1946. After his military service they started their family and lived in Tiskilwa where Frank worked at The Cheese Factory. He retired from State Farm Insurance Company where he served as an insurance agent. He was a member of the First Presbyterian Church in Princeton, IL, he enjoyed fishing, hunting, golfing and winters in Arizona. Frank is survived by his loving wife of 74 years (where they shared a room at Heartland Health Care) Lucille (Forney) White; one daughter Kristie (William) Cass; one son Paul (Barbara) White; five grandchildren, Laura (Steve) Cass Gray, David (Shawna) Cass, Kathryn Cass Seaworth, Jason White, Nichole (Ritch) White Fundell; eight great grandchildren; one sister, Betty Finks; one sister-in-law, Betty Jean White; and many nieces, nephews and cousins. He is preceded in death by his parents, Harry and Cecile White; three brothers; Harold White, Dave White and Clifford White. In lieu of flowers memorials may be directed to St. Jude Hospital A memorial service will be held at a later date and time. On line condolences may be left at www.norbergfh.com Arrangements by Norberg Memorial Home, Inc. & Monuments.

Princeton &#8211; Franklin T. White, 93, passed away on Monday, September 16, 2019 at Heartland Health Care in Henry, IL with his wife and daughter Kristie at his side. Frank was born on February 14, 1926 to the late Harry and Cecile (Garman)... View Obituary & Service Information

The family of Franklin T White created this Life Tributes page to make it easy to share your memories.

Send flowers to the White family.