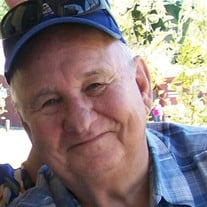 GARY A. JAMES July 13,1941 - November 24, 2020 Princeton, Illinois The family of Gary A. James, 79, sadly shares the passing of their sweet husband and dad due to complications of the Covid virus. Gary and Pat began their journey of 53 years of marriage in 1967, a rookie cop and a naive preacher’s kid. He proposed after three days but they had a two year courtship. When two daughters, Karen and Laura, were born, he parented them with unconditional love, wisdom, and was so proud of the fine women they became. His girls were so proud of their dad. Gary was born in Oklahoma City to Alton and Eileen James on July 13, 1941. He was a graduate of U.S. Grant High School, after which he joined the U.S. Coast Guard. He later graduated from Central State University. As a teen, he was a proud cadet in the Civil Air Patrol which began a lifelong passion for aviation. He was still in touch with many friends from his CAP days. To say Gary loved aviation is a huge understatement! He was a WWII aviation photographer and historian, with over 50,000 slides of military aircraft which were meticulously researched and organized, and he traded slides with people all over the U.S. and the Netherlands. He and Pat spent hours at airports with the understanding that one airport equaled one antique store! He could smell an airport and would start sniffing when one was near! He was also a member of the Oklahoma Air National Guard for twenty years. In l967, Gary joined the Oklahoma City Police Department and found his niche early-on in crime scene reconstruction. He was a supervisor in homicide, the head of white collar crime, and worked on special projects for the chief’s office. In 1979, Gary was one of two OCPD forensic investigators chosen to study at Scotland Yard. This opportunity of a lifetime changed the trajectory of the rest of his career and the way in which the OCPD organized investigations. After twenty one years, the state training agency for police, the Council on Law Enforcement Education and Training, asked Gary to join their staff to teach crime scene reconstruction full-time. He traveled the state teaching, later moving into management. He would often take his classes outside, set up crime scenes, and was known for his expertise throughout the state. He was also an adjunct instructor for The University of Central Oklahoma. After retiring from CLEET, he provided courtroom security for the U.S. Marshall Service. Gary ended his career working in safety and security for the First Baptist Church of Oklahoma City, where he also volunteered in the kitchen as chief dishwasher for the Wednesday evening meals. He also worked many years for the Affair of the Heart, a regional craft show. His passion for aviation history was joined in recent years by a passion for woodcarving. Gary was a member of the First Baptist Church OKC Woodchippers and started a woodcarving group at the Methodist church in Princeton, IL. He carved in Bettendorf IA every week, and monthly in Ottawa, IL. Gary was a longtime member of First Baptist Church of Oklahoma City and was currently a member of First United Methodist Church of Princeton, IL where Gary and Pat retired in 2014. He was unapologetic about his devout Christian faith and it was the guiding principle of his life. Gary was preceded in death by his parents, Alton and Eileen James of Yukon, OK, Pat’s sister, Nancy Liner of Moore, OK, and Pat’s parents, Carl and Martha Nelson of Blanchard, OK. He is survived by his wife, Pat James of Princeton, IL; his sister Trudy Lowell and her husband, Ron, of Norman, OK; his daughter Karen Kloepping, her husband Brett and his two grandchildren, Trent and Tricia Kloepping, all of Princeton, IL; his daughter Laura Spence and her husband, Mark Pickett of Martinsville, IN; Pat’s sister, Becky Wood and her husband James of Choctaw, OK. There is a host of cherished nieces, nephews, cousins, and many friends who loved him like family. Gary was the rock of the extended family and was always there for them in time of need and for the many who sought his wisdom over the years. He had a multitude of lifelong dear friends but in recent years had a close personal friendship with Rick Alexander of Blue Hill, ME and Sam Escobedo of San Antonio, TX. Gary was a quiet, humble man and would have probably never told you about his career achievements since they did not define who he was. He was blessed with such an interesting life and was quietly grateful to God for the doors that had opened for him. While he left his mark in his career, Gary was a loving husband, the best dad, a big brother, and a special friend. He loved his family and friends beyond words. And he was so easy to love. His heart was big enough to embrace anyone who crossed his path and he touched so many lives. If you want to remember Gary, thank the police officers you see. And search the night skies for the brightest star, realizing that he would want you to know it may be a plane. “Some glad morning when this life is o’er, I’ll fly away: To a home on God’s celestial shore, I’ll fly away (fly away). I’ll fly away, Oh Glory I’ll fly away: (in the morning) When I die, Hallelujah, by and by I’ll fly away (fly away)” Albert Brumley Online condolences and memorials may be directed to www.norbergfh.com Arrangements by Norberg Memorial Home, Inc. & Monuments.

GARY A. JAMES July 13,1941 - November 24, 2020 Princeton, Illinois The family of Gary A. James, 79, sadly shares the passing of their sweet husband and dad due to complications of the Covid virus. Gary and Pat began their journey of 53 years... View Obituary & Service Information

The family of Gary A James created this Life Tributes page to make it easy to share your memories.

Send flowers to the James family.