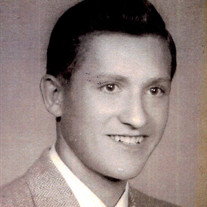 Princeton – George Wayne Lutes, 89, passed away at the Veterans Home in LaSalle, IL on Monday, May 18, 2020. George was born on February 16, 1931 to the late Orville and Eunice (Hoover) Lutes in Princeton, IL. He was a graduate of Princeton High School, Class of 1948. He married Vivienne Irwin in Rudyard, MI on October 2, 1953. George joined the U. S. Coast Guard in January of 1952 and served during the Korean War. He owned and operated Lutes Well Drilling until he retired in 1996. He was a member of the Illinois Water Well Association and First United Methodist Church, in Princeton, IL. He also served as the Fire Chief for the Malden Fire Department for many years and also served on the Malden Bank Board. George enjoyed fishing, any time, any place. From Oceans to lakes. He loved going on the annual deep sea fishing trip with the fellas. He worked a lot of hours, operating his business, which was a labor of love. He loved spending time with his family, wife, kids and grands. He is survived by his wife of 66 years, Vivienne Lutes; three children, two sons, Geoff (Sharon) Lutes of Black Hawk, CO, Greg (Machi) Lutes of San Francisco, CA and a daughter, Anne (Brett) Taylor of Malden, IL; five grandchildren, Savanah, Brock, Cheyanne, Bryce and Sierrah; one brother, Kenneth (Lyndell) Lutes from Utah and one sister, Carol (Dee) Eidson of Missouri. Preceded in death by his parents, Orville and Eunice Lutes, one sister, Mary (Lutes) Rabe. In Lieu of flowers memorials may be directed to the Veterans Home in LaSalle, IL and the First United Methodist Church, Princeton, IL. A private family graveside service will be held at Elm Lawn Cemetery in Princeton, IL at a later date and time, officiated by Reverend Ryan Sutton. Online condolences may be left at www.norbergfh.com Arrangements by Norberg Memorial Home Inc. & Monuments.

The family of George Wayne Lutes created this Life Tributes page to make it easy to share your memories.

Princeton – George Wayne Lutes, 89, passed away at the Veterans...

Send flowers to the Lutes family.