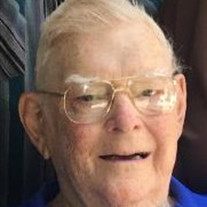 Gerald L. Linker 1937-2018 Gerald Lee Linker, 80 of Malden, passed away on Saturday, February 17, 2018 at home surrounded by his family. He was born on May 25, 1937 in Bureau County, IL to William and Lila (Welch) Linker. He married Joyce Hensel on July 27, 1958. Gerald worked for Kern Motor Company, Skelly Truck Stop and then opened his own business, Linker Custom Repair and Paint in Malden. He was a longtime collector of antique engines and tractors. He was also a longtime member of several clubs, Bureau Valley Antique Club for 35 years, Antique Engine and Tractor Association of Geneseo, Rumely Products Collectors, Badger Steam and Gas Engine Club of Baraboo, WI. for 53 years and Northern Illinois Steam Power Club of Sycamore for 60 years. He is survived by his wife; two son's, Steve Linker of Malden and Dave (Brenda) Linker of Malden; one daughter, Vickie (Shannon) Bickett of Princeton; one granddaughter, Kristin (Nathan) Mangrich of Princeton; four grandson's, Jason (Kim) Bickett of Princeton, Blair Bickett of Princeton, Trevor Bickett of Travis Air Force Base in CA. and Damion Estes of Princeton. Also surviving are two great grandchildren, Easton and Teagan Mangrich; one brother, Bill Linker of Hollowayville and two nephews, Will (Jolene) Linker of Malden and John (Molly) Linker of New Zealand. Funeral services for Gerald will be Saturday, February 24 at 1 PM at the Norberg Memorial Home in Princeton. Pastor Gary Brooks will officiate. The family will receive friends on Saturday, February 24 from 11 AM until time of service at the funeral home. Burial will take place at a later date. In lieu of flowers, memorials may be directed to the Malden Fire Dept. or Malden Lions Club. Online condolences may be left at www.norbergfh.com

The family of Gerald Lee Linker created this Life Tributes page to make it easy to share your memories.

Send flowers to the Linker family.