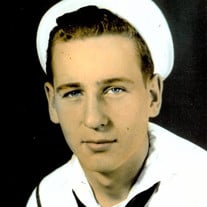 Princeton – Gilbert “Gib” E. Martin, 91, of Princeton, IL passed away on Friday, June 1, 2018 at the Illinois Veterans Home in LaSalle, IL. Gib was born on October, 19, 1926 in Pueblo, Colorado to Cora Schenk Martin. He graduated from Princeton High School and soon enlisted in the United States Navy. He served our country from October 1944 to June 1946 and was most proud of his service on the USS Franklin. He was a survivor along with the rest of the members of the 704 Club from the USS Franklin, which nearly sunk 50 miles from the main land of Japan in 1945. He married Mary Stencel August 19, 1979. Gib started his own carpet business Martin Flooring Company in Princeton, IL and then sold real estate in the area until retiring. He was a member of the 48+ Princeton Gun Club, Princeton Moose Lodge, Princeton Elks Lodge, Ducks Unlimited, Princeton American Legion, CV13 704 Club of USS Aircraft Carrier Franklin “Big Ben” and the Relator’s Association. Gib is survived by his wife Mary Stencel Martin as well as daughters, grandchildren and great grandchildren. He is preceded in death by his mother. Visitation for Gib will be on Thursday, June 7, 2018 at Norberg Memorial Home, Inc. in Princeton, IL from 11:00 a.m. to 1:00 p.m. Services will be held at Norberg Memorial Home, Inc. on Thursday, June 7, 2018 at 1:00 p.m. officiated by Deacon John Murphy, followed by internment at Oakland Cemetery, Princeton, IL. In lieu of flowers the family asked that memorials be directed to the American Legion, Princeton, IL or Donor’s Choice. Online condolences may be left at www.norbergfh.com

The family of Gilbert "Gib" E Martin created this Life Tributes page to make it easy to share your memories.

Send flowers to the Martin family.