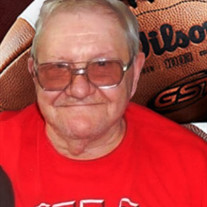 Princeton – Glen Marcus Anderson, 86, of Princeton, IL passed away on Saturday, November 16, 2019 at Aperion Care surrounded by loved ones. Glen lovingly referred to as Glenny, was born on October 11, 1933 to the late Andrew and Alma (Hawkins) Anderson. He attended Princeton Schools. Glen married Phyllis Girard in the mid 50’s, she was always considered the love of his life. In his early years he worked building pole barns, later he enjoyed trucking until he retired from Barrs Steel Company. After his retirement he was the caregiver for Frank Westifer for many years. He enjoyed swimming and diving, until a diving accident. Glen loved watching and playing sports. He loved watching the White Sox, Chicago Bears, Bulls and Cub’s. One of the highlights of his life he would always say, was attending a White Sox Game. Glen’s best friend was the late Doug Storm and his wife Joelle who he lived with on and off for 30 years. As well as the Storms, he was also very close with Maynards in New Bedford, IL where he lived in the younger years of his life. Many of his adventures were spent with the Storm family fishing and hunting with his best friend, Doug and all the Storm boys. He also had a special friendship with the late Bessie Storm, Doug’s mother. His favorite sister, Ruth said that he would always tell her “he stayed alive this long because he was the orneriest of the bunch.” Glen is survived by his two sons, Mike Anderson, LaSalle, IL and Gary Anderson, Seatonville, IL; two daughters, Tammy (David) Koch of Davenport, IA and Susan (Steve) Arteberry of Princeton, IL; two granddaughters, Crista Beauliev and Brittany Kalina; one sister, Ruth Ramberg, Oglesby, IL; one brother Floyd Dickinson, Princeton, IL; as well as several nieces, nephews and cousins. He is preceded in death by his parents, two sisters, Dorothy Neff and Verna Salazar, four brothers, Laverne Anderson, Gene Anderson and two brothers in infancy, his favorite nephew, Andrew (Andy) Anderson, as well as many aunts, uncles and cousins. In lieu of flowers memorials may be directed to the donor’s choice in Glen’s honor. A visitation for Glen will be held at Norberg Memorial Home, Inc. & Monuments on Friday, November 22, 2019 from 12:00 p.m. to 2:00 p.m. Services to follow at 2:00 p.m. at Norberg Memorial Home, Friday, November 22, 2019, officiated by Pastor Laura Root-Tanner. Cremation rites accorded. A private burial will be held at a later date and time. Online condolences may be left at www.norbergfh.com Arrangements by Norberg Memorial Home, Inc. & Monuments.

Princeton &#8211; Glen Marcus Anderson, 86, of Princeton, IL passed away on Saturday, November 16, 2019 at Aperion Care surrounded by loved ones. Glen lovingly referred to as Glenny, was born on October 11, 1933 to the late Andrew and Alma... View Obituary & Service Information

The family of Glen M Anderson created this Life Tributes page to make it easy to share your memories.