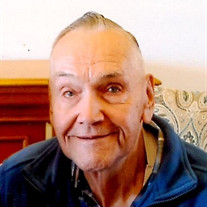 Princeton - Glen W. Rabe passed away on Saturday, March 19, 2022 at his home. Glen was born in Sublette, IL on January 11, 1933 to the late Vertus and Geraldine (Dremann) Rabe. He was a graduate of Princeton High School, Class of 1950. He met the love of his life, Sharon (Grabill), they married on December 13, 1953 at the Malden Methodist Church. He enlisted in the United States Marine Corp and served from 1954 to 1956 during the Korean War. He was proud to serve and protect. He was honorably discharged in 1956. "Semper Fidelis is the motto of every Marine, an eternal and collective commitment to the success of our battles, the progress of our Nation, and the steadfast loyalty to the fellow Marines we fight alongside." Words Glen lived by. Glen farmed all of his life. He was named Outstanding Young Farmer of Bureau County in 1969. He was a member of the Princeton Masonic Lodge, Scottish Rite and Mohammad Temple of Peoria. He also served on the Wyanet Grade School Board from 1966 to 1979 as well as taught Sunday School and was also a youth leader for 25 years. He was a member of the First Christian Church in Walnut where he also served as a Church Elder. He loved to hunt, fish, go to auctions and sales. In his earlier years he was quite the roller skater, even working at the skating rink as a floor guard. He was also a good dancer and would take Sharon dancing, they both loved to dance. His best memories were spending time with his family. Glen is survived by his wife of 68 plus years, Sharon Rabe of Princeton, IL; three children, Dan (Deb) Rabe of Princeton, IL, DeAnn (Tom) Underwood of Princeton, IL and Darrin (Chris) Rabe of Princeton, IL; six grandchildren, Adam (Erica) Rabe, Mark (Jenny) Rabe, Beau (Casey) Underwood, Jenna (Erik) Rolfs, Collin (Madalyn) Rabe and Connor Rabe; eight great grandchildren and two great-great grandchildren. Preceding Glen in death are his parents, Vertus and Geraldine Rabe, one sister, Verda Johnson and a brother, Dean Rabe. Memorials may be directed to Glen and Sharon Endowment Scholarship Fund of Eureka College or the First Christian Church of Walnut. A visitation for Glen will be held at Norberg Memorial Home, Inc. & Monuments on Friday, March 25, 2022 from 5:00 p.m.to 7:00 p.m. and March 26th from 10-11 am. Services will be held the following day, Saturday, March 26, 2022 at 11:00 a.m. at Norberg Memorial Home, Inc. & Monuments, officiated by Glen's grandson, Reverend Beau Underwood. Graveside services to follow at Oakland Cemetery, Princeton, IL. Officiated by Reverend Underwood, military rites accorded. Online Memorials and Condolences may be directed to www.norbergfh.com Arrangements by Norberg Memorial Home, Inc. & Monuments.

Princeton - Glen W. Rabe passed away on Saturday, March 19, 2022 at his home. Glen was born in Sublette, IL on January 11, 1933 to the late Vertus and Geraldine (Dremann) Rabe. He was a graduate of Princeton High School, Class of 1950. He... View Obituary & Service Information

The family of Glen Rabe created this Life Tributes page to make it easy to share your memories.

Send flowers to the Rabe family.