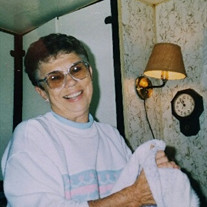 Princeton – Gloria J Clary, 86, of Princeton IL, passed away on Friday, May 31, 2019 at her home surrounded by loved ones. Gloria was born in Princeton, IL to the late Louis and Lucille (Sledgister) Flinn. She was a graduate of Princeton High School, Class of 1950. She married the late Stanley Kenneth Clary on June 14, 1952 in Princeton, IL. She stayed at home raising children until opening the first of many restaurants in Princeton. Her first was Gloria’s Oasis Steakhouse, then she opened Gloria’s Northern Café on the North end of town and Gloria’s Corner Café. She also worked at James Shoe Store and then she was the Dietary Supervisor at Prairie View Nursing Home, which is where she retired from. She loved reading, spending many hours when she had free time curled up with a good book. She also loved anything outdoors. She loved camping all over the place but especially at Condit’s Camp Ground, in Putnam, IL. She loved cooking and creating new recipes to share with everyone at her restaurants. Spending time creating something for others to enjoy. She loved animals and a few of her favorites were her cat Pretty Boy and her dog Precious. Her favorite things, was spending time with her family over a great meal talking about everyone’s day. Gloria is survived by one son, Kenny (Kari) Clary of Murfreesboro, TN; and one daughter, Sandy (Kevin) Reuter of Princeton, IL; two grandchildren, Brian Clary and Ryan Reuter; five great grandchildren, Logan Reuter, Aubrey Reuter, Xyan Clary, Zachary Clary and Summer Webster-Clary; one brother, Lew Flinn. She is preceded in death by her parents; husband, Stanley Clary (2007); one grandson, Eric Clary (2010). In lieu of flowers, memorials may be directed to the family for charitable distribution. A Celebration of Life will be held at a later date and time. Arrangements by Norberg Memorial Home, Inc. Princeton, IL. Online condolences may be left at www.norbergfh.com

Princeton &#8211; Gloria J Clary, 86, of Princeton IL, passed away on Friday, May 31, 2019 at her home surrounded by loved ones. Gloria was born in Princeton, IL to the late Louis and Lucille (Sledgister) Flinn. She was a graduate of Princeton... View Obituary & Service Information

The family of Gloria J Clary created this Life Tributes page to make it easy to share your memories.

Send flowers to the Clary family.