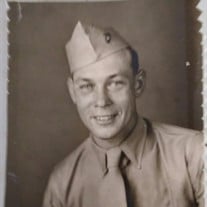 Princeton – Harold J. Oberheide “Hal” passed away on November 23, 2018 at Liberty Village, Princeton, IL. surrounded by loved ones. Hal was born on February 26, 1924, in Paola, Kansas to William and Alma (Neu) Oberheide. He married the late Virginia Middleton in December of 1952, she passed in 2005. He married his second wife Joanne Brown on May 15, 2009 in Arlington, IL. He worked at General Motors for many years in charge of Labor Relations. He also worked at Electra Motors as Safety Director, retiring in the early 1990’s. He was a member of the Masonic Lodge. He moved to Princeton in the early 2000’s to have his son Harold assist with his wife Virginia’s who was having health issues. Hal enjoyed fishing and fixing cars. Hal was a staunch supporter of TEC and Cursillo Prison Ministries. He loved to dance and support his favorite team, the L.A. Dodgers. He served as a US Marine in World War II, The Battle of Iwo Jima (19 February – 26 March 1945) this was a major battle in which the United States Marine Corps landed on and eventually captured the island of Iwo Jima from the Imperial Japanese Army (IJA) during World War II. Hal is survived by his second wife, JoAnne Brown Oberheide; four children, Charles Oberheide, Linda (Juan) Wiegering, Richard (Nancy) Oberheide and Harold Oberheide; ten grandchildren; eighteen great grandchildren; and one great-great grandchild and several nieces, nephews and cousins. He is preceded in death by his parents, his first wife, Virginia Middleton Oberheide; four siblings, Louis, Leonna, Eileen and Thelma; one great grandchild, Scottie. Services for Harold will be held at a later date and time. Online condolences may be left at www.norbergfh.com Arrangements by Norberg Memorial Home, Inc.

The family of Harold J Oberheide created this Life Tributes page to make it easy to share your memories.

Send flowers to the Oberheide family.