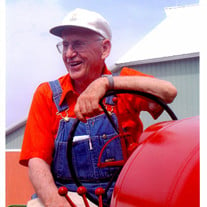 Dover Illinois - Harold B Steele, of Dover IL, passed away peacefully February 1, 2019, at Heartland Health Care of Henry, IL. Harold was born July 8, 1922 to Forrest and Georgia (Baker) Steele in Sublette, IL. He graduated from Princeton High School in 1940 and attended the University of Illinois, College of Agriculture. He was a US Army Veteran and served in the European Theater. Rising to the level of Captain, he was awarded the Purple Heart, Silver Star, Army Commendation Medal and European Theater of Operations Medal and two battle stars. When hostilities ended, he served as Chief Agent of Criminal Investigations, US Forces in Austria. He met, and married, Margery Whiteley, in Vienna, Austria in 1946. Harold was a lifelong farmer. In addition to his farming interests, he served as a board member and President of the Bureau County Farm Bureau from 1956 to 1968. He was a member, Vice President and President of the Princeton High School Board of Education from 1952 to 1971.He was elected to the position of President and CEO of both the Illinois Farm Bureau and Country Companies, serving from 1970 to 1983. He was a member of the American Farm Bureau from 1971 to 1983, serving on its executive committee in 1981 and 1982. He was appointed, by Governor Richard Ogilvie, to the Illinois Judicial Inquiry Board from 1971 to 1977. He was nominated, by President George H W Bush, and confirmed as Chairman of the Board, to the Farm Credit Administration from 1989 to 1992. Harold was named an Outstanding Young Farmer of Illinois in 1956, and named a Master Farmer by Prairie Farmer magazine in 1970. He received the University of Illinois Distinguished Service Award in 1984. In 2000 he was recognized by The Lincoln Academy of Illinois for his contributions to agriculture. Harold is survived by his four children, Greg (Sandra) Steele, of Dover, IL; Linda (Noel) Hobbs of Aurora, CO; Becky (Tom) Hall of Princeton, IL; and Susan (Mike) Teslow of Galveston, TX; two AFS Foreign Exchange daughters, Dr Akke Van Der Zijpp of the Netherlands and Kyoko (Shinobu) Tanaka of Japan. His five grandchildren include Kristopher (Dawn) Hall, Alanna Hobbs, Major Chad (Dr. Michelle) Foreman, Katherine (Michael) Baldwin and Rachael Foreman; two foreign exchange grandchildren, Karin Yamada and Jumi Yamada. Great grandchildren include Jacob, Hailey and Garrett Foreman, Emelia and Olivia Baldwin, Brynlee and Ella Hall. He was preceded in death by his parents, his wife, Margery, two brothers and two sisters. Private services will be held at a later date and time. Online condolences may be left at www.norbergfh.com. Arrangements by Norberg Memorial Home, Princeton, IL

The family of Harold B Steele created this Life Tributes page to make it easy to share your memories.

Send flowers to the Steele family.