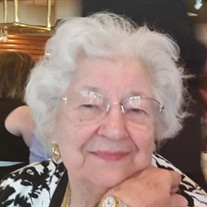 Princeton – Helen F. “Tootie” Halberg, 91, of Princeton, IL passed away on Thursday, August 2, 2018 peacefully in her home while sleeping. Tootie was born on March 7, 1927 in DePue, Illinois to Peter and Helen (Kozlowski) Kruchinski. She was a graduate of DePue High School and studied at Northern Illinois University in DeKalb, IL. She married the late Robert C. Halberg, November 25, 1953 and started her family. She was a long-time employee at Westclox for over twenty years and retired from her job at Perry Memorial Hospital in 1989. She also ran a side business out of her home as a seamstress. She was a member of the Princeton VFW Auxiliary, she was a den mother, PTA President, an avid bowler and a member of the Princeton Bowling Association and a member of the Perry Memorial Retiree Breakfast Club. She also volunteered at the Closet in Princeton, IL. Tootie was a diehard Cubs fan, an excellent seamstress and an accomplished gardener. Tootie is survived by, her son, Robert “Bob” (Christine) Halberg, one sister, Patricia Mohr, one grandchild, Matthew (Sara) Compton, and three great grandchildren, Addison, Taylor and Sayge Compton, as well as several nieces, nephews and cousins. She is preceded in death by her parents, Peter and Helen Kruchinski, her husband, Robert Halberg, one brother, Robert Kruchinski, one grandchild, Brandon Compton and many brother-in-laws and sister-in-laws. Visitation for Tootie will be held on Monday, August 6, 2018 at St. Matthews Lutheran Church, Princeton, Il. from 10:00 a.m. to 12:00 p.m. Services will be held on Monday, August 6, 2018 at St. Matthews Lutheran Church, Princeton, IL at 12:00 p.m. officiated by Reverend Scott Schmidt, followed by a graveside service at Oakland Cemetery, Princeton, IL. In lieu of flowers, memorials may be directed to the family and they will donate to the charity of their choice. Online condolences may be left at www.norbergfh.com

The family of Helen "Tootie" F Halberg created this Life Tributes page to make it easy to share your memories.