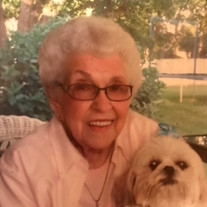 Princeton – Henrietta “Hank” E. Nickelsen 96, passed away on Sunday, August 16, 2020 at Aperion Care in Princeton while holding the hand of her loving son Rich. Henrietta was born on February 3, 1924 to the late Henry and Katherine (Velker) Westman in Princeton, IL. She was a graduate of Princeton High School where she met her love, Richard “Dick” E. Nickelsen. They married on January 19, 1943 and were married for 58 years before Dicks passing in 2000. She worked as the lunch lady starting at Washington Elementary School. Then she started doing secretarial work for the school and retired as the Princeton Elementary School District Administration Secretary. She was also the personal secretary for the Superintendent before retirement. She was a lifetime member of Hampshire Colony Church as well as the Hampshire Circle Women’s Auxiliary. She was an avid golfer, she had a house full of trophies to prove it. Even getting a hole in one, which her husband Dick made a holder for to display with her other accolades and winnings. She and Dick would spend their winters in Texas so that they could play golf year round. She enjoyed playing bridge and was quite the dancer. From square dancing to polka, you could catch her and Dick at the Elks Club dancing the night away. She was an excellent baker and would keep baked goods in her freezer so when she had company, she always had something homemade to server her guest. She was also quite talented at making beautiful baby blankets, whether it be knitting or crocheting. She loved spending time with family and friends, especially her grandchildren. Henrietta is survived by one son, Richard Nickelsen II of Princeton, IL; five grandchildren, Beth Nickelsen of Paxton, IL, Todd (Colleen) Nickelsen of Dover, IL, Jill (David) Hopper of Wyanet, IL, Becky (Nicholas) Kyryliuk of Charleston, SC and Kelsey Petersen of Detroit, MI; four great grandchildren, Courtney, Micah, Bianka and Lily. She is preceded in death by her parents, Henry and Katherine Westman, her husband, Richard “Dick” Nickelsen, one daughter, Mary Kaye Petersen, twin infant sons, one sister, Verna Buchman, one daughter-in-law, Pam Nickelsen and one brother-in-law, Bill Petersen. A visitation will be held on Thursday, August 20, 2020 at Norberg Memorial Home, Inc. & Monuments from 10:00 a.m. to 11:00 a.m. Services will be held on Thursday, August 20, 2020 at Norberg Memorial Home, Inc. & Monuments at 11:00 a.m. officiated by Pastor Carl Johnson, followed by a graveside service at Elm Lawn Cemetery in Princeton, IL. Per the family’s wishes, this service will be livestreamed in a private group on Facebook. Please see the following link to join the group prior to services. https://www.facebook.com/groups/Norbergmemorialhomememorialservicegroup/ In lieu of flowers, memorials may be directed to the Hampshire Colony Congregational Church in Princeton, IL. Online condolences and memorials may be left at www.norbergfh.com Arrangements by Norberg Memorial Home, Inc. & Monuments.

The family of Henrietta E Nickelsen created this Life Tributes page to make it easy to share your memories.

Send flowers to the Nickelsen family.