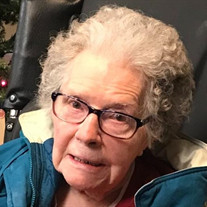 Irma Joy Huffstodt 1922-2018 Heaven welcomed our beautiful angel, Irma Joy Huffstodt of Princeton, into Paradise on Thursday evening, January 11th at Premier Estates in Muscatine, Iowa. She was born at home on Sep 03, 1922 in Buda, IL to Arthur and Kathryn (Hawksworth) Tumbleson. She married Ben Huffstodt on May 9, 1943 in San Francisco, CA. where Ben was serving in the US Coast Guard. He preceded her in death Dec. of 1991. Joy was one of the last ones of her generation to cross over. She was the only one of her close friends and family to see the Cubs win their World Series title. Although her want to cross over was long, Joy was an example of unending patience, perseverance, and most importantly, unending faith while she waited. Joy had an active life serving her community. She was a member of the First United Methodist Church and the American Legion Auxiliary. She worked as an election judge, delivered mobile meals, and volunteered at the blood mobile. She also enjoyed helping out at the Bureau Valley Reality Office. Along with volunteering, Joy enjoyed playing bridge, golf and loved being with her family. Joy was the heart of her family. She rejoiced when things were good, she grieved when things were not so good and what she could not control, she would pray about. Left behind to carry on her beautiful legacy are her beloved girls, Terry Lynne (late Carl) Ellberg and Carolyn Joy (Mike) Dailey; her devoted little sister, Shirley (late James) Forsythe; her cherished grandchildren, Mike (Connie) Jensen, Marla Jensen, Laura (Kevin) Custis, Patty (late Jerry) McDonald, Diane (Scott) Palubiak, Danny (Paula) Ellberg, Terri (Rick) Haas and Michelle (Brandon) Humphreys; her 15 precious great grandchildren; several great great grandchildren; her special nephews Dennis (Alana) Tumbleson, Tom (Mary) Tumbleson, Larry (Michelle) Forsythe, and Robert (Janet) Huffstodt. Joy also leaves behind her many caregivers, at home, at Colonial Hall and at Premier Estates in Muscatine. She received the best of care. Last but not least, she leaves behind her very special friends, Amy Merritt, Judy Harris, and Tracy Merkel. They all helped her in so many ways through the years. Her last six weeks in Muscatine were some of the best days she's had in the last few years. The Custis clan made her feel very loved and cherished. Godspeed our beautiful Angel... we will see you on the other side. There to greet her Thursday evening were her loving husband, Ben, her cherished great grandson, Luke Jensen, her parents, Kathryn and Arthur Tumbleson, her son in laws, Doug Riley and Carl Ellberg, her brothers Jack and Lynn Tumbleson, her niece Linda Huffstodt Beebe, her best friends Dorothy Philbrook and Mary Groy, and many, many more friends and relatives. Funeral service will be Tuesday, Jan 16, 2018 at 11:00 AM at The First United Methodist Church in Princeton. Pastor Brian Gilbert will officiate. Burial will follow in the Oakland Cemetery. The family will receive friends one hour prior to the services at the church. Memorials may be directed to First United Methodist Church or Aperion Care (formerly Colonial Healthcare) activities dept. Online condolences may be left at www.norbergfh.com

The family of Irma Joy Huffstodt created this Life Tributes page to make it easy to share your memories.

Send flowers to the Huffstodt family.