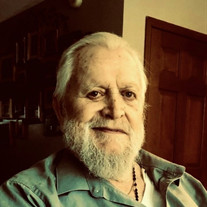 Normal - Ivan “Ike” W. Mark Sr., 88, formally of Sheffield and Princeton, IL, passed away at 7:40 a.m. on Thursday, September 24, 2020 at St. Joseph’s Medical Center in Bloomington, IL. Ike was born January 1, 1932 in Platte Center, Nebraska, to the late Earl and Emma (Melcher) Mark. He married Eleanor W. Ray on August 7, 1954 in Princeton, IL. Ike worked at LCN Door Closures for 44 years and was very proud of the work he did. He always pointed out an LCN door closer whenever he ran across one. He was previously a member of St. Louis Catholic Church in Princeton, IL and, most recently, St. Patrick’s Catholic Church in Sheffield, IL. He also participated in various civic organizations throughout his life. As long as anyone can remember, Ike has been a lifelong Cubs fan. Watching Cubs games was his favorite pastime. He collected and repaired pocket watches, but there really wasn’t anything he couldn’t fix, as a self-taught Jack of all trades. He enjoyed golfing and coin collecting. He loved a good steak on the grill and watching the old westerns and the weather channel. He was quite the bowler in his younger years and loved spending time with his grandchildren. He would take them fishing and would alternate taking each grandchild one at a time to breakfast for some one on one special time with grandpa. He and Ellie loved to take trips on the train. One of their favorites was for their 50th wedding anniversary where they traveled from Chicago to Seattle, California, Phoenix, Texas, North Carolina, Boston and back to Chicago. Often asked if he was the real Santa, he would even give his home address and receive letters from the children writing to Santa and he would write back. He loved his four legged baby, Mitzi. His favorite time was always spent with family whenever everyone had time to get together. He loved when all the “Marks” showed up at church together on Sunday morning. Those who will lovingly remember Ike include his loving wife of 66 years, Eleanor (Ellie) Mark of Normal, IL; four children, Pat (Dee Workman) Mark of East Peoria, IL, Ivan (Cheryl) W. Mark, Jr. of Bloomington, IL, Colleen Stout of Phoenix, AZ and Karen (Doug) Jones of Normal, IL; 9 grandchildren, Aaron (Cassandra) Stout, Robert Stout, Eric (Kay) Stout, Nathan (Bethany) Stout, Stephanie (Matt) Hedgecock, Nicholas (Sabrina) Mark, Garrett Mark, Adam Jones, and Cordell Jones; 5 great grandchildren, Nolan Stout, Claire Stout, Hudson Stout, Evelyn Stout, and Beauden Mark; one sister, Donna Triplett of Oklahoma; one brother, Derrold Mark of Bangor, PA; and many nieces and nephews. He was proceeded in death by his parents Earl and Emma Mark, an infant son, Jerry Mark, youngest daughter, Suzanne Mark, and two brothers, Virgil Mark and Richard Mark. In lieu of flowers, memorials may be directed to the family for charitable distribution. A visitation for Ike will be held on Friday, October 2, 2020 from 5:00 p.m. to 7:00 p.m. at Norberg Memorial Home, Inc. & Monuments in Princeton, IL. Service Mass for Ike will be Saturday, October 3, 2020 at 10:00 a.m. at St. Patrick’s Catholic Church, 233 W Atkinson St, Sheffield, IL, officiated by Father Mark Miller. Online memorials and condolences may be left at www.norbergfh.com Arrangements by Norberg Memorial Home, Inc. & Monuments.

The family of Ivan Wilfred Mark created this Life Tributes page to make it easy to share your memories.

Send flowers to the Mark family.