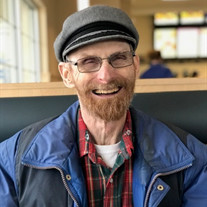 Princeton - Jack Richard Proffitt, a.k.a. Cactus Jack or Action Jackson passed away at Aperion Care in Princeton, IL on Wednesday, March 23, 2022, one day away from his 75th birthday. Jack was born in Tazewell, VA to the late John and Pearl (Thacker) Proffitt on March 24, 1947. He was raised with his ten siblings in Marysville, OH where he also attended school. He moved to the Pittsburgh area in the 60's and worked at J & L Steel Mill in Aliquippa, PA. He also spent time working various positions in residential construction through the years. He moved to Tiskilwa, IL in 2006 and retired in 2009. He enjoyed bowling, throwing horse shoes, big family bonfires and flea marketing. Not everyone knew Jack as he was a quiet and reserved man. Those that were fortunate enough to know him, thought of him as a truly great man. He was honest to a fault; never told a lie, held back or candy coated anything. Jack was an extremely hard working man who believed in a true work ethic and always gave 110%. He was passionate about music and proud of his album collection. If a good song came on the radio or jukebox, he didn't hesitate to share his enthusiasm with a hoot, a holler or even a dance move or two. He lived quite modestly and was an avid flea marketer who loved a good bargain and could brag about when and where he scored them. He was a family man who enjoyed spending quality time with his children, grandchildren, siblings and nieces and nephews who often referred to him as the "Favorite Uncle". If he loved you, he loved you fiercely. He was a diehard Pittsburgh Steelers fan, he loved to watch and talk football and could quote stats and highlights from decades ago off the top of his head. His warm smile and infectious laugh could light up a room. Those who knew Jack will miss him terribly and those who didn't just missed out. He is survived by two children, Dawna Proffitt of Henry, IL and Dwayne (Jenine) Proffitt of Tiskilwa, IL; five grandchildren, Michelle Rohal of Columbus, OH, Brandi Rohal of Cleveland, OH, Shaela Hayes of Cincinnati, OH, Brodrick (Emma) Proffitt of Wheeling, IL and Emma Proffitt, of Ames, IA; five sisters, Ethel Marie Holocomb of Pear Blossom, CA, Juanita Postlethwait of Marysville, OH, Thelma Proffitt of Tuscon, AZ, Ruby Hoffine of Plain City, OH and Carolyn Salyers of Marysville, OH; three brothers, Donald (Barb) Proffitt of Hilo, HI, Wayne (Terry) Proffitt of Chatsworth, CA and RJ Proffitt of Kissimmee, FL; and several nieces and nephews. Preceded in death were his parents, John and Pearl Proffitt, a brother, Sidney Proffitt and one sister Georgia L. "Peach" Nickelson. In lieu of flowers, memorials may be directed to the family. Online memorials and condolences may be directed to www.norbergfh.com Arrangements by Norberg Memorial Home, Inc. & Monuments

Princeton - Jack Richard Proffitt, a.k.a. Cactus Jack or Action Jackson passed away at Aperion Care in Princeton, IL on Wednesday, March 23, 2022, one day away from his 75th birthday. Jack was born in Tazewell, VA to the late John and Pearl... View Obituary & Service Information

The family of Jack Richard Proffitt created this Life Tributes page to make it easy to share your memories.

Send flowers to the Proffitt family.