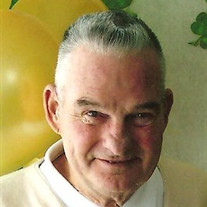 James T. Loftus 1940-2007 Mass of Christian Burial for James T. Loftus, age 66 of Princeton, will be Tuesday, Jul 03, 2007 at 12:00 Noon in St. Louis Catholic church, Princeton. Father Jeffery Stirniman will officiate. Burial will follow in the Oakland Cemetery. Military Rites will be performed. The family will receive friends on Jul 03, 2007, from 9:00am to 11:45am, in the Norberg Memorial Home. Mr. Loftus passed away on Saturday, Jun 30, 2007, 1:15am at Perry Memorial. He was born on Jul 26, 1940 in Decatur, Illinois to Milton and Doris (Wright) Loftus. James married Mary Jean Henneberry on august 29, 1959 at St. Mary’s Church in Utica, IL. He served in the US Marine Corps for 17 years. During that time he completed two tours in Vietnam, received a purple heart, a bronze star, a Navy Commendation, and a Combat V. James was an expert rifleman and expert pistol man. He also received a National Defense Medal. James was also in the St. Bede Sports Hall of Fame. After the Marine Corps James worked for the City of Princeton Water and Electrical Dept. He was an active member of St. Louis Catholic Church. James is survived by his wife of 47 years Mary Jean Loftus of Princeton and his children: James Loftus, Julie (Brian)Kunkel, Jill(Jerry) Nielsen, Joe(Lucy) Loftus, John(Kelly)Loftus, Jeff(Carol)Loftus, Jay(Julie)Loftus, Jeremy(Heather)Loftus, Judd Loftus, Jessica(Mike) Nelson, Justin Loftus, and David Loftus. Also surviving are 19 Grandchildren. He was preceded in death by his parents and one brother in infancy. Memorials may be directed to the family.

The family of James T. Loftus created this Life Tributes page to make it easy to share your memories.

Mass of Christian Burial for James...

Send flowers to the Loftus family.