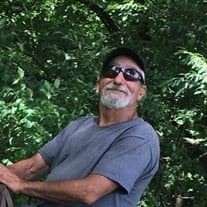 Buda – James Leroy Mecum, 63, of Buda, IL passed away at his home on Saturday, February 1, 2020 surrounded by his loved ones. James, lovingly referred to as Jim by all that knew him was born on June 9, 1956 in Kewanee, IL to the late Eugene and Gladys (Olin) Mecum. He was a graduate of Buda Western High School, Class of 1974. He married his love, Cathy Grabill in Buda on October 11, 1975. He had a long career in construction. Most of that time was with W. C. Erectors in Annawan, IL. He took early retirement due to health reasons as a construction supervisor. He was a great lover of music, to the point where he could not only name the song and artist, but he could also tell you what album it came from as well. He loved helping people, being quite the jack of all trades. His daughter Torry, would prepare list of things she needed her dad to fix or make for her, a task he loved doing and something that allowed them to stay so close over the years. He was forever her hero. He enjoyed fishing and riding his Harley, every chance he got. He loved his dog Elle, a bulldog with the personality to match his own. He loved spending time with his grandchildren. He loved to take them fishing or make s’mores. He built the grands their own zip line and he would ride it with them or just push them on the swing, anytime he had with them was well spent and loved. His best memories were spent creating memories with his family and friends, just hanging out. Jim is survived by his wife of nearly 44 years, Cathy Mecum of Buda, IL; his daughter, Torry (Ryan) Goida of Las Vegas, NV; this three grandchildren, Logan, Mason and Quinn; five siblings, Wes Mecum of Kenosha, WI, Margret Mecum of Pekin, IL, John (Mim) Mecum of Buda, IL, Pat (Dean) Schnurbusch of Pocahontas, IL and Gloria Barnes of Buda, IL. He is preceded in death by his parents, Eugene and Gladys Mecum, one brother, Robert Mecum. In lieu of flowers, memorials may be directed to the family. A Celebration of Life will be held on Friday, February 7, 2020 at Norberg Memorial Home Inc. & Monuments from 5:00 p.m. to 7:00 p.m. Online condolences may be left at www.norbergfh.com Arrangements by Norberg Memorial Home, Inc. & Monuments.

Buda &#8211; James Leroy Mecum, 63, of Buda, IL passed away at his home on Saturday, February 1, 2020 surrounded by his loved ones. James, lovingly referred to as Jim by all that knew him was born on June 9, 1956 in Kewanee, IL to the late... View Obituary & Service Information

The family of James Leroy Mecum created this Life Tributes page to make it easy to share your memories.

Send flowers to the Mecum family.