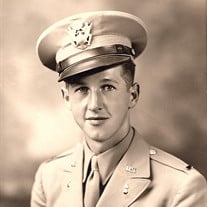 Princeton – James Drummer Prendergast, 96, formerly of Princeton and Arlington, Illinois died December 14, 2017, in Ranchos Palos Verdes, California, where he had moved recently. Jim was born on May 9, 1921, to William Henry and Margaret Drummer Prendergast of LaMoille. He married Laura Jane Novotny on August 21, 1948, at St. Patrick’s Church in Arlington, Illinois. A lifelong resident of Bureau County, Jim grew up on a farm in Berlin Township and attended school in LaMoille prior to winning a county scholarship to the University of Illinois. During World War II, he served as an officer in the US Army 126th Ordnance Corps, landing on Utah Beach on D-8 of the Normandy invasion and fighting in the Battle of the Bulge. After 3 years active duty (1943-46), he continued in the Army Reserve, retiring in 1981 with the rank of Major. He graduated from the U of I in 1949 with a Bachelor of Science degree in Agricultural Engineering, having been named to the Tau Beta Pi Engineering Honor society. He worked for Harry Ferguson Farm Equipment Co., Detroit, and International Harvester, Quincy and Chicago, before returning to farm in Arlington for 27 years. He also worked at Knauf Implement Co. in Ladd, and after his retirement from farming in 1982, taught classes in Agricultural Mechanics at Illinois Valley Community College and worked at Allen Lumber in Princeton. In his “spare” time, he did countless odd jobs, took up upholstery and model railroading, and rehabbed 15 single family houses. In 2007 he received the Diocese of Peoria’s Pere Marquette Award, recognizing his tireless service to his churches, St. Patrick’s in Arlington (where he was the first child baptized) and St. Louis in Princeton. He was also an active member of the Knights of Columbus and the American Legion. Jim is survived by his wife of 69 years, Laura Jane, of Rancho Palos Verdes; two daughters and their husbands, Dr. Susan P. Schoelwer and William Schoelwer of Washington, DC and Sheila A. Bloodgood and David Bloodgood of Rancho Palos Verdes, CA; five grandchildren, Margaret Susan, William James, and Jennifer Laura Schoelwer, and Ryan James and Patrick Thomas Bloodgood; and two great-grandchildren, Vivian Jane and William Joseph Schoelwer. He was preceded in death by his parents and sister, Jane Mosbacher. A visitation will be held at Norberg Memorial Home, Inc. on Friday, April 20, 2018 from 5-6:30 pm, , followed by a Rosary at 6:30 pm. Mass will be held at St. Louis Catholic Church, Princeton, Illinois, Saturday, April 21, 2018 at 10:00 am, officiated by Father Daniel Gifford, followed by an Inurnment at Calvary Cemetery, Arlington, Illinois. Memorials may be made to St. Louis Catholic Church, Princeton; St Patrick Catholic Church, Arlington; or Catholic Relief Services. Online condolences may be left at Norbergfh.com

Princeton &#8211; James Drummer Prendergast, 96, formerly of Princeton and Arlington, Illinois died December 14, 2017, in Ranchos Palos Verdes, California, where he had moved recently. Jim was born on May 9, 1921, to William Henry and Margaret... View Obituary & Service Information

The family of James Prendergast created this Life Tributes page to make it easy to share your memories.

Send flowers to the Prendergast family.