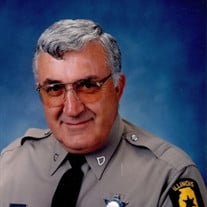 Princeton – James Rodney Etter passed away, May 16, 2018 after a courageous battle with brain cancer. James Rodney Etter was born June 6, 1942 in Augusta, IL to Russell and Mildred Sackman Etter. He graduated from Carthage High School in 1960 and served in the Vietnam War (Army) from 1964-1966. Rod worked at J.I. Case, Burlington, Iowa as a welder. He graduated from the Illinois State Police Academy in March, 1969. Rod honorably served the State of Illinois as a Senior Master Trooper, District 17, until his retirement in December, 1997. He received the Governor’s award and Purple Heart for valor for his involvement in apprehending a burglary suspect who shot a Putnam County Deputy in 1982. Rod was involved in an additional shooting in a Putnam County bean field, receiving a minor injury prior to his retirement. He lived out his State Police oath by the courage he displayed and ran toward the danger. He assisted and served many throughout his 30 year career. Rod farmed eighteen years and was involved in the family farm operation until the time of his passing. Rod married Marie L. Ernat at St. Louis Church, Princeton on June 27, 1970. After living in Hoffman Estates, Rod and Marie resided in Dover Township near Princeton since 1972. Together, they raised two beautiful daughters, his pride and joy, Tracie Kristine and Karmen Beth. He belonged to the Fraternal Order of Police, Bureau County Farm Bureau and attended Christ Community Church of Princeton. He enjoyed his favorite sport, fishing, family vacations, computer work, landscaping, visiting with his coffee buddies and his beautiful grandchildren. Rod is survived by his wife of nearly 48 years, Marie, two daughters; Tracie (Darryn) Foley, of Blythewood, South Carolina and Karmen (Brendan) Keane, of Frankfort, IL, four grandchildren; Savannah Mistarz, James Foley, Nora Keane and Ellie Keane. Also surviving are siblings; Carroll (Donna) Etter of Quincy, IL, Dixie Durbala of Burlington, IA, Doris (Fred) Lung of Dallas City, IL, Lennie (Abby) Etter of Keokuk, IA, and Timothy (Brenda) Etter of Nauvoo, IL. He is preceded in death by his parents, Russell and Mildred Etter, two brothers; Jackie Eugene and Willard Dean, and an infant sister. Services will be at Christ Community Church, Princeton, IL on Monday, May 21, 2018 at 10:30 a.m., officiated by Pastor Jon Panner. Interment will follow at Prairie Repose Cemetery, Dover, IL. A visitation will be held Sunday, May 20, 2018 from 3:00 p.m. to 6:00 p.m. at Norberg Memorial Home, Princeton, IL. Memorials may be left in Rod’s memory to The American Brain Tumor Association, Gateway Services, or the charity of the donor’s choice. Online condolences may be left at www.norbergfh.com

The family of James Rodney Etter created this Life Tributes page to make it easy to share your memories.

Send flowers to the Etter family.