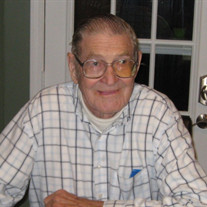 Tiskilwa – E. James Schertz, 86, passed away March 30, 2018 at Manor Court, Princeton, Illinois. James was born November 13, 1931 to Clarence Schertz and Marjorie A. (Scott) Schertz in Tiskilwa, Il. He was a graduate of Tiskilwa High School in 1950 and served in the United States Army in Korea. He married Joanne Rieker of Malden on February 23, 1963. He was a farmer his entire life in the Tiskilwa area. He was a member of the American Legion and served on the Tiskilwa High School Board of Directors for many years. James was an ASCS Committee Man, and a Deacon of Tiskilwa Baptist Church. He served as the Bureau County Fair Township Director, and was a member of the Bureau County Farm Bureau. James enjoyed sending time with family and friends and working on the farm. James is survived by his wife, Joanne, two sons; Todd (Pam) Schertz of Tiskilwa, IL and Tom Schertz of Stillwater, MN, one daughter Jamie (Tom) Hassler of Princeton, IL and nine grandchildren and one great granddaughter. He was preceded in death by his parents and one sister, Gloria Judge. Funeral services will be on Monday, April 2, 2018 at 11:00 a.m. at Norberg Memorial Home, Princeton, IL. Officiating will be Reverend Brian Strom. Burial to follow at St. Mary’s Cemetery in Tiskilwa, IL. Visitation will be from 9:00 a.m. to 11:00 a.m. on Monday, April 2, 2018 at Norberg Memorial Home. In lieu of flowers the family has asked that memorials be directed to the family. Online condolences may be left at www.norbergfh.com

The family of James Schertz created this Life Tributes page to make it easy to share your memories.

Send flowers to the Schertz family.