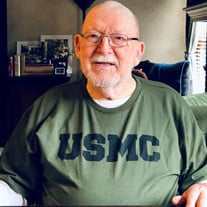 Oswego, IL – James “Big Jim” Willhite, 87, of Oswego, IL passed away at his home, surrounded by loved ones, on Monday, March 4, 2019. Jim was born on November 28, 1931, in Wyanet, IL to the late Garland and Doris (Marshall) Willhite. He was a graduate of Princeton High School, Class of 1950. He joined the U.S. Marine Corps from 1951 to 1955 and was a veteran of the Korean War. He was stationed on the front lines, in Tent City on the 38th Parallel. After being honorably discharged, he attended Western Illinois University and then moved to Chicago, IL. While living in Chicago, he found his love of music. He was able to see many of the greats in small clubs in down town Chicago, such as Louis Armstrong, Ella Fitzgerald and Billie Holiday, just to name a few. Once he returned home to Princeton to working on the family farm, he met and married the late Doris Lenihan of Princeton on September 6, 1960. He owned Schwingles Sales and Services, before going to work for the Bureau County School District, wearing many hats working at the schools, from custodian to bus driver, he retired in 1996. He also worked at Pioneer Seed Corn seasonally, celebrating his 25th year working for them in 2017. After retirement, he worked at Eagle Foods, until they closed in September of 2003. He enjoyed reading a good book and collecting antiques. You could often find him at an antique shop or estate sale on weekends, or hanging out with friends at the P.I. Big Jim enjoyed being involved in the community. He was a jack-of-all-trades and did many things from painting houses to working on the farm. He loved to do crossword puzzles and sudoku challenges, but found his greatest joy in spending time with his grandchildren. Jim is survived by his two daughters, Jennifer Hand of Downers Grove, IL and Jamison Glinski of Princeton, IL; two granddaughters, Kimberly (Justin) Hand-Harris of Oswego, IL and Kennedy Hand of Downers Grove, IL; two grandsons, Austin (Amanda) Glinski of Bloomington, IL and Micah Glinski of Denver, CO; two great-grandchildren, Milo Harris and Veda Harris of Oswego, IL; one stepson, Joe (Mary) Weller of Elgin, IL; and a special surrogate son, John (Lori) Engstrom of Wyanet, IL; one step-granddaughter, Michele (Carlos) Vaca of Mundelein, IL; and one sister, Betty Jean (Arnold) Johnson of Pahrump, NV; as well as many nieces, nephews and cousins. He is preceded in death by his parents; wife, Doris Willhite; four sisters, Evelyn Willhite, Shirley Thompson, Patricia Manning, and Marian Houch. The family will receive friends from 10 a.m. to 12:00 p.m. at Norberg Memorial Home on Saturday, March 23, 2019. A funeral service for James will be held at Norberg Memorial Home on Saturday, March 23, 2019 at 12:00 p.m. officiated by Reverend Leon McClimans. Followed by a graveside service at Elm Lawn Cemetery, Princeton, IL. In lieu of flowers, memorials may be directed to the family for charitable distribution. Arrangements by Norberg Memorial Home, Princeton, IL.

The family of James "Big Jim" R Willhite created this Life Tributes page to make it easy to share your memories.

Send flowers to the Willhite family.