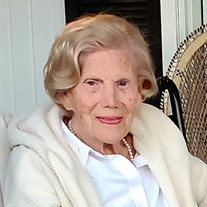 Princeton - Early on Wednesday, December 8, 2021, Jane Martha Morris Patrick Hall, 101 years old, passed away peacefully at home from natural causes. She was born October 10, 1920 on a farm in Arispie Township, Illinois to Lona Belle (Underwood) Morris and Christopher Columbus Morris, the seventh of their nine children. Jane grew up on the Tiskilwa farm and graduated from Tiskilwa High School. She survived polio at the age of 18 before beginning her ambitious career. Jane graduated from Moser Business College in Chicago, Illinois and was hired by United Airlines to begin working in New York City. While working as a ticket agent in Manhattan, she met Joe Patrick, graduate of Harvard University and a son of the renowned Canadian hockey family. Jane and Joe married in 1947 in Vancouver Canada and made their home in New York City for 35 years, making regular trips to visit her family in Princeton. In the early sixties, having started as a receptionist at Vogue magazine, Jane's talent in design and fashion earned her the position of Assistant Editor under Diana Vreeland as editor of the Shop Hound column. She also modeled for the magazine and traveled for photo shoots with the famous photographer, Peter Beard. Jane took a position as Publicity Director for Maidenform, worked a few years for Van Raalte lingerie before moving on to Keep America Beautiful, a nationwide initiative to bring awareness to Americans for their responsibility to Keep America Beautiful. Jane, in the late sixties, met John Hall in New York City who she married in 1982. They built a home at The Landings in Savannah, Georgia. John's love of golf took them to Casa de Campo, La Romana in the Dominican Republic where they owned a villa for many years. John Hall passed away in 2009. In 2018, Jane retired to live full time in Princeton, living in the family home. She was always generous to family and friends and very interested in the successes of her family. All who knew her, admired her life long irrepressible determination to live life on her own terms. She will be greatly missed by all whose lives she touched. Jane is survived by numerous nieces and nephews (24 first cousins at one time) and their families, John Hall's two children and their families, all residing all across the country. She was preceded in death by her parents, her four brothers: John, Marvin, Fred and Kermit and four sisters: Berniece West, Leola Jackson, Mary Kasbeer and Edith Dowling, all spouses and eight of the nieces and nephews. In lieu of flowers, memorials may be directed to Doctors Without Borders, Wounded Warriors or St. Margaret Hospice. Honoring Jane's wishes, visitation and interment will be limited to family only. Online memorials and condolences may be directed to www.norbergfh.com Arrangements by Norberg Memorial Home, Inc. & Monuments.

The family of Jane Martha Hall created this Life Tributes page to make it easy to share your memories.

Send flowers to the Hall family.