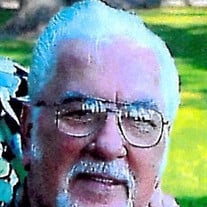 Jerrell D. “JD” Long, 76 of Amboy, passed away on May 10, 2017 at KSB Hospital in Dixon, IL. Jerrell “JD” was born on April 5, 1941 in Alco, IL to Nathan Jr. and Eva M. (Dickerson) Long. He attended Princeton Schools. He married Marilyn Yepsen on February 26, 1959 in LaSalle IL. He served in the United States Marine Corps. JD worked as a barber at B&J Barber Shop in Sterling IL, and then as a truck driver for Teamsters for 18 years. He enjoyed hunting, fishing and trapshooting with his brother and friends. JD is survived by his wife Marilyn of Amboy; two daughters, Laurie Orlando of Peoria; and Cynthia Hovey of Galesburg; one sister, Lou Elmore of Sweetwater, TN; two grandchildren, Jason (Brittany) Hovey of Bushnell, IL and Tracy (Coty) Connour of Knoxville, IL; four great grandchildren, Jace, Luke, Peyton, Caylee and one expected. JD was preceded in death by his parents; two brothers, Nathan and Billy; and one sister, Martha. The family will receive friends on Friday, May 12, 2017 from 5-7 PM at the Norberg Memorial Home in Princeton. Funeral services will be on Saturday, May 13, 2017 at 2:00 PM at the Norberg Memorial Home with Rev. Jon Panner officiating. Burial will take place following the services at Forrest Hill Cemetery in Wyanet, IL. In lieu of flowers, memorials may be directed to the family. Online condolences may be left at norbergfh.com

The family of Jerrell D. Long created this Life Tributes page to make it easy to share your memories.

Send flowers to the Long family.