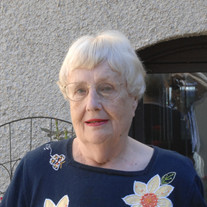 Lee Summit, Missouri – Jean Dianne (Wessel) Scott, 80, formerly of Princeton, IL passed away on Tuesday, March 17, 2020 at the Wilshire Lakewood Care Center in Lee Summit, Missouri. Jean was born on July 7, 1939 to the late Irving and Dorothy (Tolene) Wessel in Princeton, IL. She was a graduate of Southern Illinois University, Class of 1961 and received her Master of Education, Class of 1964 from University of Illinois. She married James W. Scott on February 23, 1963, they had one child, Brian. She and James divorced in 1981. She was a reading teacher in the Riverview Gardens and Ladue School Districts in St. Louis, MO; reading teacher in the Proviso School District in Hillsdale, IL; English teacher at Sauk Valley Community College in Dixon, IL and freelance writer for the Bureau County Republican newspaper. She was a member of the Evangelical Covenant Church of Princeton, IL and the Bureau County Home Economist Organization. Jean enjoyed traveling, having been to Europe nearly a dozen times including Greece, Italy, Germany, England, Ireland, Norway and Sweden. She also traveled throughout the United States including New England, Michigan and Hawaii. She enjoyed reading books and loved seeing movies. Jean was an active member of her church and enjoyed studying contemporary Christian Theology. She loved times with her family and friends. She is survived by one son; Brian (Amy) Scott of Lee Summit, MO; one granddaughter, Hillary Scott; two brothers; Norman (Mary) Wessel of Princeton and Verle (Linda) Wessel of Birmingham, AL; three nephews; David Wessel and family of Dekalb, IL, Keith Wessel and family of Homewood, AL and Jeffery Rocke and family of Burns, TN; two nieces, Julie Grunke and family of Yorkville, IL and Jennifer Waldrop and family of Murray, KY. Preceded in death by her parents Irving and Dorothy -Wessel, one sister Carol Rocke, her stepmother, Alice Wessel and one sister-in-law, Kay Wessel. In lieu of flowers memorial may be directed to the Evangelical Covenant Church in Princeton, IL. A private visitation will be held for family members only on Monday, March 23, 2020 at Norberg Memorial Home, Inc. & Monuments. From 10:00 a.m. to 11:00 a.m. with the restrictions of 10 family members or less allowed into the funeral home at one time. A graveside service will be held at Oakland Cemetery on Monday, March 23, 2020 at 11:30 a.m. officiated by reverend Derek C. Boggs, followed by burial. Online condolences may be left for the family at www.norbergfh.com Arrangements by Norberg Memorial Home, Inc. & Monuments.

The family of Jean D Scott created this Life Tributes page to make it easy to share your memories.

Send flowers to the Scott family.