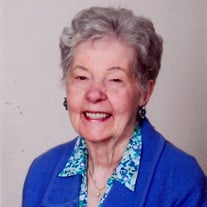 Princeton - Jeanne Carlson Poppens Pence, beloved wife, mother, and grandmother, died peacefully at home surrounded by family on Sunday, August 16, 2020. She was 90. The daughter of Charles and Florence Carlson, she was born Oct. 31, 1929 in Kansas City, Missouri, and raised in Chicago, Illinois, with her two brothers Richard and Harry. After graduating from Notre Dame High School for Girls in 1947, she received her associate degree in nursing from Mundelein College and worked at the Heinz Veterans and Columbus hospitals in Chicago. After her marriage to Arthur Poppens, she moved to Princeton where she raised their six children and happily participated in community life, including bridge clubs, PTO, antiquing, needlework, art, and Hardanger. The family later moved to Taiwan and Australia for three years before returning to Princeton in 1972. Following her divorce in 1978, she moved to Florida to begin a new chapter, renewing her nursing license and later opening the Piccadilly Limited dress shop. She returned to Princeton in 1983, where she served as an RN at Colonial Hall Nursing Home and the Covenant Children’s Home. While at the Children’s Home, she met accountant LeVon Pence. They married in 1988 and would have celebrated 32 years of marriage in September. In addition to nursing, Jeanne ran an antique stall, Tuppence Antiques, at Sherwood Antique Mall, for several years before retiring. She was also an avid traveler and had seen many parts of the world in the course of her life. Her family was amazed when, in her 60s, Jeanne made the arduous trip to Machu Picchu, Peru, as part of an educational expedition. She’d always wanted to see it, she said. Jeanne was preceded in death by her parents, Charles and Florence Carlson, one brothers and one stepson David Pence. She is survived by her husband LeVon, her daughters Elizabeth (Michael) Denius, Christine Poppens Spencer, Deanne (Timothy) Sayles, sons Timothy, Lex and Eric Poppens, stepchildren Curt, LeAnn and Patrick Pence, and grandchildren Colin and Sean Sayles, Elise, Sabrina, Elizabeth and Madison Spencer, Katharine Jeanne Denius, Emily and Michael Pence, Devon Pence, and Abigail Pence. She also leaves behind nieces Mary Carlson and JoAnne Carlson Edvardsen and nephew David Carlson, along with friends, past and present, and lasting memories of a life well lived. A memorial service will be held at 10 a.m. Friday, August 21, at Norberg’s Funeral Home, Inc. & Monuments, Princeton, IL. Officiated by Father Shawn Doubet. Per the family’s wishes, this service will be livestreamed in a private group on Facebook. Please see the following link to join the group prior to services. https://www.facebook.com/groups/Norbergmemorialhomememorialservicegroup/ In lieu of flowers and In recognition of her lifelong love of reading, the family asks that donations of any amount be made to Princeton Public Library, 698 E. Peru St. Princeton, IL 61356, in memory of Jeanne Pence. Online condolences and memorials may be left at www.norbergfh.com Arrangements by Norberg Memorial Home, Inc. & Monuments.

The family of Jeanne P Pence created this Life Tributes page to make it easy to share your memories.

Send flowers to the Pence family.