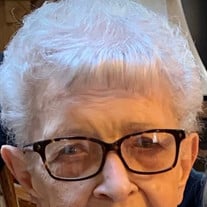 Princeton - JoAnne C. (Wilson) Gibbs, 90 of Princeton, Il passed away peacefully on Friday, August 20, 2021. Some knew her as Joan, Jo and when anyone referred to her as "Blondie" it always brought a smile to her face, knowing that they were a lifetime friend from her past. She was born on September 3, 1930 in Princeton, IL and graduated from Princeton High School, class of 1948. Married to the love of her life, Fred E. Gibbs for 57 faithful years they built a life and family together. She worked hard her entire life until the age of 55 when she retired as a co-owner of the Gibbs Cigar Store (a landmark in Bureau County 1968-1985) where she worked alongside Fred. Many memories and stories could be shared and told from her time behind that counter. JoAnne and Fred had one daughter, their proudest accomplishment. The late Debbie Lange whos untimely passing in 2019 left her with much sadness and heartbreak for the remainder of her life. She lived her entire life in Bureau County and especially embraced her hometown of Princeton with pride. She was a member of the First United Methodist Church. She looked forward to all the surrounding town festivals, boat races but especially the Homestead Festival, its parade and craft show. She loved to shop locally and give back to the people and businesses that she cherished as her neighbors and lifelong friends. JoAnne is survived by two granddaughters, who loved her dearly, Nicole (Chad) Hamel of Normal, IL and Danielle (Paul) Ekstam of Pekin, IL; five great grandchildren, Brianna, Chase, and Cole Hamel and Isabel and Liam Ekstam; her son in law Tom Lange of Princeton, IL. She was preceded in death by her parents, Harold and Ruby (Eckberg) Wilson, her husband, Fred E. Gibbs and her daughter, Debra J. (Gibbs) Lange. For those that were lucky enough to know and love her, they were lucky enough. JoAnne lived her life to the fullest and though she never traveled far, she had everything she needed and wanted within reach. From City County Park and Zearing Parks, Captain Swift Bridge and the Red Covered, Main Street, Uptown and Down and every square foot in between, she embraced it all in her almost 91 years of life. She lived the last year and one half of her life in the special care of the Karns family in Zearing, IL. In lieu of flowers, memorials may be directed to donors choice in Joane's name. JoAnn was laid to rest in a private service and burial at Oakland Cemetery, Princeton, IL. Online memorials and condolences may be left at www.Norbergfh.com Arrangements by Norberg Memorial Home, Inc. and monuments

Princeton - JoAnne C. (Wilson) Gibbs, 90 of Princeton, Il passed away peacefully on Friday, August 20, 2021. Some knew her as Joan, Jo and when anyone referred to her as "Blondie" it always brought a smile to her face, knowing that they were... View Obituary & Service Information

The family of Joan W Gibbs created this Life Tributes page to make it easy to share your memories.

Send flowers to the Gibbs family.