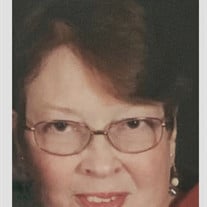 Princeton - Joan Evelyn Marella, 79, of Princeton, IL passed away Thursday, June 4, 2020 with her husband and soulmate, Guy by her side. Joan was born to the late Evelyn (Schluntz) and Frederick Schmidt, October 14, 1940 in Chicago, IL. After graduating from LaGrange Township High School, Joan attended Augustana College for a year transferring to University of Illinois where she met Guy. She received her B.A of English Literature at Elmhurst College in 1965. She married Guy Marella June 24, 1961 at Port Hueneme Naval Station, CA. with a traditional "arch of steel (sword) Salute. She taught at Catholic elementary schools in Rhode Island and Illinois while Guy served in the U.S. Navy. Upon Guy’s discharge they continued their life settling in Elmhurst, IL. While living there, she taught elementary school for a few years and then taught fire prevention in many intercity elementary schools in Chicago. She became known affectionately by the children as the "Fire Prevention Lady"! She also work as the editor for the Elmhurst Bi-Centennial History of 1976. Prior to becoming a wonderful Mother, she worked at the Elmhurst Public Library. As the kids grew older, she worked at local boutiques that feed her passion for fashion (Honey Girl) and flowers (Pfundt and Clint Florist). She became a very active member of the community, including The American Association of University Women (AAUW) and the local Auxiliary of Children’s Home and Aid Society where she developed many long and meaningful friendships throughout the years. Upon retirement, they relocated to Princeton where she became active in the community. She loved sharing her knowledge of gourmet food and wine pairing, wrote a local newsletter and assisted with wine tastings for a local wine shop. She was a valued member of the Princeton Writer’s Group and for a while in her tenure she led the group. In addition she mentored less experience writers. She also belong to the Garden Club of Princeton, where she shared her love of flowers and made many valuable friendships. Joan was accomplished in so many ways. She loved to write and was a frequently published and award-winningpoet. All looked forward to receiving her annual Christmas poem with the family Christmas card. She loved singing and was a long time choir member frequently singing solos. She loved the Arts, oftenattending the theater, classical concerts, museums and galleries. She was a lifelong student and avid reader, loving to learn of various countries, cultures and history. Boy did she ever have a book collection!! She was passionate about cooking and loved to share her gourmet cooking with friends and family. She loved nature and gardening and was an avid birdwatcher. Her proudest find was the Yellow Bellied Sap Sucker. She is survived by her loving Husband of 59 years, Guy, of Princeton; devoted Mother to daughter, Jennifer (Robert) Berg, of Aurora, IL; son, Michael Marella, of Aurora, IL; Proud Grandmother of Ryan, Wyatt and Ronin Marella; Fond Sister of Philip Schmidt; Dear Aunt of nine nieces and nephews; Dr. John O’Connell, Gloria Zangara, Kathleen Branham, Terri Schwabe, Dawn Clayton, Corri Huffman, Fred Schmidt, and Kate Smith and many great nieces and nephews and countless other loving family members and friends. Joan was preceded in death by her parents Frederick and Evelyn Schmidt, two sisters-in-law Phyllis Schmidt and Gloria O'Connell, one brother-in-law John O'Connell and one nephew Leonard O'Connell. In lieu of flowers, memorials and donations may be directed to the First Methodist Mission Fund Princeton and Princeton Theater Group-Festival 56. A Memorial Service will be held on Saturday, July 11, 2020 at 11:00 a.m. at the First United Methodist Church of Princeton. Honorary pall bearers are Rob Berg, Ryan Berg, Wyatt Berg, John O'Connell, Leonard O'Connell, Fred Schmidt. She wore her heart on her sleeve, always loving, caring and kind. She will be dearly missed. Online memorials and donations may be left at www.norbergfh.com Arrangements by Norberg Memorial Home, Inc. & Monuments.

Princeton - Joan Evelyn Marella, 79, of Princeton, IL passed away Thursday, June 4, 2020 with her husband and soulmate, Guy by her side. Joan was born to the late Evelyn (Schluntz) and Frederick Schmidt, October 14, 1940 in Chicago, IL.... View Obituary & Service Information

The family of Joan Evelyn Marella created this Life Tributes page to make it easy to share your memories.

Send flowers to the Marella family.