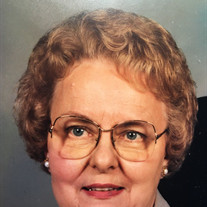 Princeton – Joan L. Panzica, 88, passed away on Wednesday, November 25, 2020, at Liberty Village in Princeton, IL. Joan was born on June 13, 1932, to the late Tadge and Louise (Faleskin) Jagelski in LaSalle, IL. She graduated from LP High School, LaSalle, IL, with the Class of 1949. She married the late Nicholas E. Panzica, Jr, on December 27, 1952, at St. Valentines Church in Peru, IL. She worked at the News Tribune in the Princeton office as a reporter for over 20 years. She retired in 1993 and worked part-time for her son David at The Paint Store and More in LaSalle where she assisted wherever needed. She was a member of St. Louis Catholic Church and volunteered at the St. Louis Catholic School. She was an excellent seamstress and a wonderful cook and baker. She enjoyed crossword puzzles, knitting, crocheting, and crafts. She loved traveling and treasured spending time with her family. Joan is survived by her four children, Denise Hochstatter of Princeton, IL, Anne Panzica of Princeton, IL, David (Rhonda) Panzica of Minonk, IL and Nicholas (Deanna) Panzica of Yellville, AK; six grandchildren, Jason (Kelly) Hochstatter, Lyndsey (Aaron) Fitzpatrick, Nicholas Panzica, Jonathan Panzica, Kurt Grieff, and Joel Grieff; one great-grandchild on the way; one sister Marilyn Credi. She was preceded in death by her parents, Tadge and Louise Jagelski, her husband of 62 years, Nicholas E. Panzica, Jr, (1/23/2015), and one son, Paul Panzica. Pallbearers will be David Panzica, Nicholas R. Panzica, Jonathan Panzica, Jason Hochstatter, and Aaron Fitzpatrick. Honorary Pallbearer, Nicholas E. Panzica. In lieu of flowers, memorials may be directed to the family for charitable distribution. A visitation for Joan will be held at Norberg Memorial Home, Inc. & Monuments on Friday, December 4, 2020, from 9:30 a.m. to 10:30 a.m. Services for Joan will be held at St. Louis Catholic Church on Friday, December 4, 2020, at 11:00 a.m. officiated by Father Tim Hepner. Followed by a graveside service at Oakland Cemetery in Princeton, IL. Online memorials and condolences may be left at www.norbergfh.com Arrangements by Norberg Memorial Home, Inc. & Monuments.

The family of Joan L Panzica created this Life Tributes page to make it easy to share your memories.

Send flowers to the Panzica family.