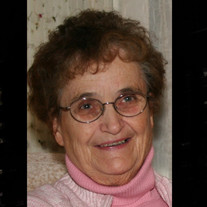 Tiskilwa – Joanne M Schertz, 82, of Tiskilwa, IL, passed away at Liberty Village in Princeton, IL on Thursday, April 4, 2019 surrounded by loved ones. Joanne was born on September 21, 1936 to the late Joseph and Glenna (Dickinson) Rieker in Princeton, IL. She attended kindergarten through eighth grade at the Hazel Grove School, a one room school house. She was a graduate of Malden High School Class of 1954. She would spend her time after school working part-time at the Henning’s Bakery. She lived in rural Dover until she was 24, she then moved to Tiskilwa, IL where Gib Coors introduced her to the love of her life Emile James Schertz. Emile and Joanne dated off and on for nine year before marrying in 1963 at the Malden Methodist Church. Joanne and Emile started their family soon after having two sons, Todd and Tom; and one daughter, Jamie. She was a member of the Tiskilwa Auxiliary for Women for over ten years and a member of the American Legion for over twelve. She really enjoyed listening to public radio and hearing the information about cattle and farming. Let’s not forget her love of listening to the Chicago Cubs and the Chicago Bears. Being a lifelong fan, she was elated and listening when they won the World Series in 2016. Her greatest loves were always her grandchildren. She absolutely adored them. The kids could have a fridge full of food, but would call grandma and ask to come over to her house so that she would make them her famous cheese burgers. She would make them a cheese burger every single time. She would always make herself available whenever the grands needed her, no matter what. She was kind, loving and a wonderful person, an amazing cook and just a wonderful kind person. She will be greatly missed by anyone that knew her, but especially her grands. Joanne is survived by her two sons, Todd (Pam) Schertz of Tiskilwa, IL and Tom (Amy) Schertz of Stillwater, MN; one daughter, Jamie (Tom) Hassler of Princeton, IL; nine grandchildren, Cody, Collin, Colbi, Casey, Mitch, Megan, Emily, Ethan and Avery; one great grandchild, Melody; one brother, Gary (Sandy) Rieker of Princeton, IL; two sisters, Shirley Lilley of Princeton, IL and D. Joyce Wathen of Overland Park, KS and numerous nieces and nephews. She is preceded in death by her parents; her husband, Emile Schertz (3/30/2018), one sister Maxine Lazar; one brother, who was her twin, Joseph Rieker, Jr.; two nephews, Mark Rieker and Mike Rieker. In lieu of flowers, memorials may be directed to Tiskilwa Community Womens Association. A visitation for Joanne will be held on Wednesday, April 10, 2019 at Norberg Memorial Home, Inc. in Princeton, IL from 10:00 a.m. to 11:30 a.m. Services for Joanne will be at Norberg Memorial Home, Inc. on Wednesday, April 10, 2019 at 11:30 a.m., officiated by Pastor Brian Strom. Followed by a graveside service at St. Mary’s Cemetery in Tiskilwa, IL. Online condolences may be left at www.norbergfh.com Arrangements were honorably done by Norberg Memorial Home, Inc.

Tiskilwa &#8211; Joanne M Schertz, 82, of Tiskilwa, IL, passed away at Liberty Village in Princeton, IL on Thursday, April 4, 2019 surrounded by loved ones. Joanne was born on September 21, 1936 to the late Joseph and Glenna (Dickinson)... View Obituary & Service Information

The family of Joanne M Schertz created this Life Tributes page to make it easy to share your memories.

Send flowers to the Schertz family.