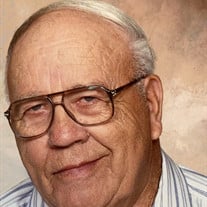 Princeton – Joe D. Warren, 90, of Princeton, IL passed away at his home, surrounded by his loved ones on Tuesday, February 18, 2020. Joe was born on August 21, 1929 in Sheffield, IL to the late Emmett and Burlie (Milby) Warren. He attended school in Bradford, IL before working as a gandy dancer for the railroad. He was drafted, serving in the U.S. Army as a mechanic in Anchorage, AK from 1951 to 1953. Once honorably discharged from the service, he married his love, Eileen Bruner in Granville, IL on June 12, 1953. On the way to get married the car broke down and, Joe being Joe, he got out and fixed it himself. A story they enjoyed sharing with friends and family. He began his working career at Montavans and then Moline Motors. After mastering his trade, he owned and operated the Shell Station in Princeton before opening his own gas station and repair shop, Joe’s Sunoco in 1978. Joe changed the name to Joe’s Midtown Auto Repair in 1991. Two of his sons, Randy and Mark, worked beside him, learning from the best. Together they formed a family business, and Joe was still there running things and never officially retired. He was a trusted mechanic in the community and work kept him busy and he loved helping people. He was a Cub Scout and Boy Scout Leader as well as a Princeton Youth Baseball Coach. He loved woodworking, he really could build and fix anything. He even built the family’s first camper, the “Gypsy Wagon”. The family travelled everywhere to go camping, even to Mount Rushmore, creating many fond memories of camping adventures. He was a true blue Cubs fan his entire life and was proud of them win or lose. His favorite times were spent with family over a good meal. Joe is survived by his loving wife of 66 years, Eileen Warren of Princeton, IL; five children, Randy (Crystal Lilley) Warren of Princeton, IL, Brenda (Doug) Jensen of Bureau, IL, Mark Warren of Princeton, IL, Carla (Kevin) Beaber of Princeton, IL and Heath (Christy) Warren of Chicago, IL; seven grandchildren, Nathan Warren, Adam (Kayla) Warren, Alyssa (Jonathan) Pleasant, Austin (Katie) Jensen, Natasha (Mike) Jensen-Matta, Alanna Warren, and Patrick (Elyse) Beaber; seven great grandchildren, Brynlee, Aria, Penelope, Nash, Paxton, Cayden and Brooke; one brother, Ray (Mary) Warren; and his beloved dog, a beagle named Lady; as well as several nieces, nephews and cousins. He is preceded in death by his parents Emmett and Burlie Warren, brothers Robert, Jack, Bill, Harvie, and Everett, and sister Irene. In lieu of flowers, memorials may be left to the family for charitable distribution. A celebration of life will be held on Monday, March 2, 2020 from 10:00 am to 12:00 pm, with services immediately following at 12:00 pm, at Norberg Memorial Home, Inc. & Monuments, officiated by Reverend Ryan Sutton, and military rites will be accorded. A private burial service will be held at a later date. Cremation rites accorded. Arrangements by Norberg Memorial Home, Inc. & Monuments. Online condolences may be left at www.norbergfh.com

The family of Joe D Warren created this Life Tributes page to make it easy to share your memories.

Send flowers to the Warren family.