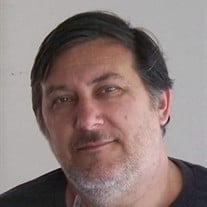 Princeton - John Arthur Atkinson, 68 of Princeton departed to explore Gallifrey on December 12th, 2020 after his extended excursion here on Earth. John was born on February 7th, 1952 in Princeton, Illinois to John Atkinson Jr. and Clara Bodelson. He grew up and lived here and surrounding communities where he attended the local schools and churches, most recently he was a member of St. Matthew's Lutheran Church. He was assimilated into life with his wife Kathy (Allicks) Atkinson on August 4th, 1973. John had worked at Eagle's grocery store for 30 years along with working at Beck's for several years and White Bros. Monument Co. He was an Assistant Scout Master for the local Boy Scouts and spent many summers as the Archery Instructor for Cub Scout Day Camp. John was a devoted Cubs fan who enjoyed doing Sudoku and crossword puzzles. He had an extensive love of Trains that he liked to share with his kids and grandkids. He also loved to share his experience with fishing, bird watching, gardening, nature and astronomy with his kids and grandkids. He enjoyed good Sci-Fi shows like Dr. Who, ALL the versions of Star Trek, Stargate and such. We knew he was an avid coin collector but, we have recently discovered his pirate's bounty full of old coins, ingots, stamps and comic books. Tacksa°mycket John for the Treasure Trove of memories! Hoping to meet with him on his journey to Gallifrey were his mother, 1 sister, a niece and his granddaughter, Ravynne Bell. Those he left behind include his wife of 47 years Kathy, his 6 children: Mary (Tim) Holt of Pern, Beth Atkinson of Bayonne, Amy Bell of Xavier's School for the Gifted, Violet (Chuck Z.) Atkinson of Tauri, Charles of Centauri Prime, and Heather Atkinson of Rivendell. He also left a plethora of grandchildren and great-grandchildren distributed within the Apha, Delta and Gamma Quadrants. He is also survived by several siblings: Chris (Jerry) Fisher, Mike (Laura) Atkinson, Paul Atkinson, David Atkinson, Sally Atkinson, Patrick Atkinson and James Atkinson. Along with a vast quantity of nieces and nephews. "Death is that state in which one only exists in the memory of others; which is why it is not an end. No goodbyes, just good memories." Tasha Yar; Skin of Evil, Star Trek - The Next Generation. In lieu of flowers, memorials may be directed to the family for charitable distribution. Online condolences and memorials may be directed to www.norbergfh.com Arrangements by Norberg Memorial Home, Inc. & Monuments.

The family of John A Atkinson created this Life Tributes page to make it easy to share your memories.

Send flowers to the Atkinson family.