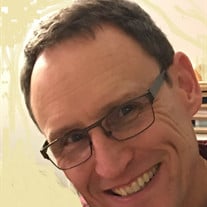 Princeton – On Tuesday, April 28, 2020, John H. Efflandt, 60, passed away unexpectedly at Perry Memorial Hospital in Princeton, IL. John was born on October 23, 1959, in Evanston, IL to Herman and Geraldine (Rechtoris) Efflandt. After graduating from Fremd High School, he majored in music at Northwestern University. He then went to the Defense Language Institute in Monterey, California and was stationed in South Korea as a Korean linguist with the United States Air Force. On June 23, 1990, he married Sandy Falber at Immanuel Lutheran Church in Palatine, IL. They raised a son, Matt and a daughter, Jackie. In 1993 they moved to Princeton, IL where he was currently employed as a driver for the Ace Hardware Distribution Center in Princeton. Besides being an accomplished trumpet player at Northwestern University, John enjoyed singing as a member of the worship team at the First Baptist Church of Princeton. He loved vacationing with his wife, spending time with his children, and being a grandpa. John was a White Sox and Bears fan who enjoyed watching movies and loved animals, especially dogs. John is survived by his wife, Sandy, his daughter, Jackie Efflandt, his son, Matt (Julia) Stickels, two grandchildren, Thomas and Emily; his mother, Geraldine Efflandt; two brothers, Bill Efflandt and Bob (Christine) Efflandt. He was preceded in death by his father, Herman Efflandt. Online condolences and memorials of the donor’s choice may be left at www.norbergfh.com Arrangements are in the care of Norberg Memorial Home, Inc. & Monuments. The family will hold a celebration of life at a later date.

The family of John H Efflandt created this Life Tributes page to make it easy to share your memories.

Send flowers to the Efflandt family.