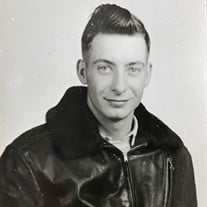 Princeton – John “Jack” E. Larson 84 of Princeton, IL passed away on Saturday, September 12, 2020 at Perry Memorial Hospital in Princeton, IL. Jack was born on March 20, 1936 to the late Henry and Lillian (Harrison) Larson in Princeton, IL. He was a graduate of Princeton High School, Class of 1954. He married Sandra Gloden on March 3, 1963. His first job was at Hanna Trucking, as a driver, but he soon started his long time career and life love of being a farmer. He could do just about anything, a true jack of all trades. Self taught in almost everything he did, there was nothing he couldn’t fix or make. Wheather it was woodworking, plumbing, carpentry, auto repair, roof work, you name it, if he didn’t know how to do it, he would teach himself. He loved restoring antique tractors, many of which were featured in previous Homestead Parades. He collected anything John Deere and wouldn’t be caught without his trusty John Deere hat. He enjoyed old westerns and old country music. He was an amazing provider, husband, father and grandfather. His kindness and sassiness will be greatly missed by all who knew him. In lieu of flowers, memorials may be directed to Friends of Strays. Jack is survived by his daughter Kim Larson of Princeton, IL, his daughter-in-law, Bonni Buccini of Princeton, IL; his two grand daughters, Kaitlin Schmitt and Mia Buccini, both of Princeton, IL; one sister, JoAnne Seaburg from Sterling, IL; two nephews and three nieces. He is preceded in death by his Parents, Henry and Lillian Larson, his wife, Sandra K. Larson (Feb 5, 2016), one son, Thomas H. Larson (July 7, 2002), two infant daughters and one brother, Donald R. Larson. A graveside service will be held on Friday, September 18, 2020 at 10:00 a.m. at Oakland Cemetery in Princeton, IL, officiated by Pastor Laura Root-Tanner. Online memorials or condolences may be left at www.norbergfh.com Arrangements by Norberg Memorial Home, Inc. & Monuments.

The family of John Edward Larson created this Life Tributes page to make it easy to share your memories.

Send flowers to the Larson family.