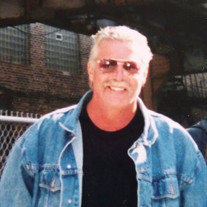 Wyanet - John S. Scrimsher, 65, passed away on Monday, May 17, 2021 at Aperion Care in Princeton, Il surrounded by loved ones. John was born in Enid, OK to the late William L. and Mildred (Griffen) Scrimsher Sr. on June 18, 1955. He graduated high school in California and attended one year at IVCC. He met his love Jayne Horton in Princeton and they had 24 plus amazing years together. He worked construction most of his life. He was incredibly handy and could build almost anything, from pole barns to gutters, if it needed to be built, John was your guy. He worked until retirement in 2018 due to health issues. John loved to cook, something that was self-taught. He had moved around to many places as a child and found cooking was a way, he could learn about the different flavors everywhere he had lived. One of his favorites was Cajun cooking, something he learned while living in Louisiana. He was lovingly referred to as "Cajun John" by his friends, family and loved ones. He had lived in Iran for a time because of his father's job and moved back to OK, then California and Louisiana and finally settling in Princeton in 1988. He loved to garden and took great pride in growing his own food. He was an avid fisherman and woodworker and a creative person in general. He was a big time Cubs fan as well as New Orleans Saints Fan. He is survived by his life partner of 24 plus years, Jayne Horton of Wyanet, IL; two sons, Caleb (Amanda) Scrimsher of Tiskilwa, IL, and Kyle Scrimsher of Covington, KY; one step daughter, Tori Rayne of Houston, TX; one sister Grace Vetter of Princeton, IL; a twin brother, James Scrimsher of Princeton, IL; six grandchildren, Andrew, Elliot, Olivia, Jasmine, Jenna and Medhi; as well as several nieces, nephews and cousins. John is preceded in death by his parents, William and Mildred Scrimsher, Sr., one brother William Scrimsher, Jr. Cremation rites accorded. In lieu of flowers, memorials may be directed to the family. Online condolences and memorials may be directed to www.norbergfh.com Arrangements by Norberg Memorial Home, Inc. & Monuments

Wyanet - John S. Scrimsher, 65, passed away on Monday, May 17, 2021 at Aperion Care in Princeton, Il surrounded by loved ones. John was born in Enid, OK to the late William L. and Mildred (Griffen) Scrimsher Sr. on June 18, 1955. He graduated... View Obituary & Service Information

The family of John S Scrimsher created this Life Tributes page to make it easy to share your memories.

Send flowers to the Scrimsher family.