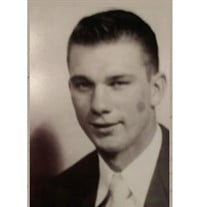 Princeton - Joseph Charles Dempsky, 90, of Princeton, IL passed away at Manor Court on Wednesday, April 13, 2022 at 4:40 p.m. Joe was born on June 29, 1931 in Stickney, IL to the late Joseph and Annette (Carr) Dempsky. He attended high school in Chicago and married the late Rae Greenough on November 3, 1952. He joined the United States Army in 1951, serving during the Korean War. He received the Korean Service Medal with four Bronze Campaign Stars as well as the United Nations Service Medal. He was a member of the Local 803 in DuPage as well as the Malden American Legion. He spent most of his life working with masonry. He eventually became a self-employed mason/concrete worker and sought after for his craftsmanship. Joe enjoyed fishing, any time, any day, it didn't matter to him, Lake Pepin, MN was his spot and he and his son David both bought land there and shared many wonderful weeks, weekends, days there creating memories of the one that got away. He also loved playing cards, something he shared with his bride Rae. He is survived by one son, David (Carol) Dempsky of Lockport, IL; three grandchildren, Sarah (Rick) Musil, Kristen Kelly and Lauren (Brian) Baldwin; seven great grandchildren; two sister, Lucille Kawckynski, and Marlene "Tina" Dempsky. As well as numerous nieces, nephews and cousins. Preceding Joe in death, his parents, Joseph and Anette Dempsky, his wife of 64 years, Rachel "Rae" Dempsky (12/10/2016), one sister, Dorothy Dempsky and one brother-in-law, Luke Kawckynski. In lieu of flowers, memorials may be directed to the Local American Legion. A visitation will be held for Joe on Tuesday, April 19, 2022 at 10:00 a.m. to 11:00 a.m. at Norberg Memorial Home, Inc. & Monuments. Services at 11:00 a.m. at Norberg Memorial Home, Inc & Monuments, officiated by Pastor Laura Root-Tanner. Graveside services following immediately after the services at Malden Cemetery in Malden, IL. Military Rites Accorded. Online memorials and condolences may be directed to www.norbergfh.com Arrangements by Norberg Memorial Home, Inc. & Monuments

The family of Joseph C Dempsky created this Life Tributes page to make it easy to share your memories.

Send flowers to the Dempsky family.