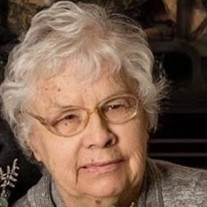 Princeton – Joyce M. Genslinger, 82, of Princeton, IL passed away at Aperion Care on Friday August 21, 2020. Joyce was born on January 5, 1938 to the late Delbert and Adeline (Anderson) Sapp in Princeton, IL. She graduated from Princeton High School, Class of 1955. She married Richard Genslinger on November 20, 1958 at the First Lutheran Church of Princeton and she and Richard started their family together. She was a member of the Wyanet Methodist Church and the Wyanet VFW Women’s Auxiliary. She would spend her days taking care of her babies and everyone else’s, also. Their home was always filled with the hustle and bustle of children, from laughter to tears, she was there to manage it all. She enjoyed quilting, crocheting and watching a good western. She played cards with her Ladies Card Club. She loved to cook and bake and teach those skills to her grandkids. One of the family’s fond memories, as well as the rest of the town’s kids, was of her making and giving out donuts for Halloween, and making tea rings at Christmas and giving them to family, neighbors and friends. She loved to travel. Her greatest joy was always her children and grandchildren. Joyce is survived by her husband of almost 62 years, Richard Genslinger; six children, Gay (Michael) Uttenhove of New Prague, MN, Gary (Laurie) Genslinger of Highlands Ranch, CO, Danny (Donna) Genslinger of Kennesaw, GA, Susan (Gregg) Fisher of Princeton, IL, Darren (Brandy) Genslinger of Malden, IL and Lisa (Tim) Bruch of Mitchell, SD; 11 grandchildren, Jason Uttenhove, Kristin (Justin) Schaub, Ashley (Zack) Zaitz, Lindsay (Dan) Wehrwein, James (Christie) Ross, Hannah Genslinger, Seth (Whitney) Fisher, Reed Fisher, Chelsea (Colton) Stage, Natovia Talbot, and Matthew Bruch; sixteen great grandchildren, April, Emily, William, Benjamin, Addie, Wade, Hazel, Cameron, Nathan, Lilly, Judah, Steven, Seth, Chase, Piper, and Finley; two sisters, Barbara Kosanke of North Carolina and Judy Forman of Iowa; as well as a great-aunt, several in-laws, nieces, nephews and cousins. She is preceded in death by her parents Delbert and Adeline Sapp, one daughter, Theresa Genslinger, one grandson, Justin Schindel, three brothers, Jerry Sapp, Fred Sapp and Jim Sapp, her mother and father in-law, Clarence and Marjorie Genslinger, as well as beloved brothers- and sisters-in-law. In lieu of flowers, memorial may be directed to the family. The family will have a private memorial service at a later date and time. Online condolences may be left at www.norbergfh.com Arrangements by Norberg Memorial Home, Inc. & Monuments.

Princeton &#8211; Joyce M. Genslinger, 82, of Princeton, IL passed away at Aperion Care on Friday August 21, 2020. Joyce was born on January 5, 1938 to the late Delbert and Adeline (Anderson) Sapp in Princeton, IL. She graduated from Princeton... View Obituary & Service Information

The family of Joyce M Genslinger created this Life Tributes page to make it easy to share your memories.

Send flowers to the Genslinger family.