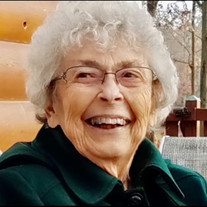 Streator - Joyce Ann (Street) VeZain, 92, formerly of Princeton, IL, passed away on November 1, 2021, at Heritage Health in Streator, IL, with family present. Joyce was born on February 19, 1929, in Chicago, IL, to the late Roscoe Street and the late Mary "Mae" (Reilly) Brush. She was a graduate of St. Xavier's Academy in Ottawa, IL, Class of 1946. She then went to Northern Illinois University and graduated with a Bachelor's degree in Elementary Education, Class of 1950. She married the late William "Bill" Edward VeZain on July 15, 1950, at St. Patrick's Catholic Church, Ottawa, IL. She was very active at St. Louis Catholic Church, serving as a lector and various other roles. She was also a member of the Retired Teachers Association, PTA, the Metro, as well as a member of several bridge groups in Princeton over the years. She began teaching in Ottawa and continued her career in Princeton. She loved teaching; it was something she was born to do, and she loved her students. She was known mostly as Mrs. VeZain, a title she was extremely proud of, not just because she was married to Bill, but also because she had the opportunity to teach and affect so many young lives. She retired from Princeton Elementary School District in 1994 and remained friends with many of her coworkers throughout the years. Joyce enjoyed sewing, a skill she learned at an early age and then passed on to her daughters. She loved books, and though she didn't have a favorite, she just loved to read and get lost in the stories. She enjoyed playing cards with friends, family, and her bridge groups. She enjoyed knitting, crocheting, and spending time with her cat, (she always had a pet cat). Her best memories were time spent with her children, grandchildren, and great-grandchildren. She loved telling stories, playing games, discussing books, and teaching others a new skill. She will be missed by many. She is survived by her five children: daughters Linda (Edward) Volkman of Streator, IL, Denise Kitchen of Mackinaw, IL, DuAnne VeZain of Princeton, IL, Michelle (Michael) Atchison of Daphne, AL, and son Thomas VeZain of Woodridge, IL; four grandchildren: Michael (Ashley) Volkman, Patrick Volkman, Kathryn (Brandon) Bailes, and Brian (Allison) Volkman; and six great grandchildren: Marshall, Elliot, Penelope, Harvey, Kadyn, and Hazel. Joyce is preceded in death by her husband Bill (2005), her father Roscoe and his wife Helen, her mother Mae and her husband Edgar, and her brothers Ronald, Robert, and Richard Brush. In lieu of flowers, memorials may be directed to the Princeton Senior Center or Princeton Elementary Schools. A visitation will be held Monday, November 8, 2021, at Norberg Memorial Home, Inc. & Monuments in Princeton from 10:00 a.m. to 11:30 a.m. A funeral Mass will be held Monday, November 8, 2021, at St. Louis Catholic Church in Princeton at 12:00 p.m. officiated by Monsignor J. Kruse. Graveside services to follow at Elm Lawn Cemetery in Princeton. Online condolences may be left at www.norbergfh.com. Arrangements by Norberg Memorial Home, Inc. & Monuments.

The family of Joyce A Vezain created this Life Tributes page to make it easy to share your memories.

Send flowers to the Vezain family.