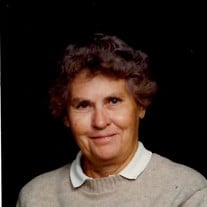 Princeton – Kathryn C. (Tatty) Monroe McCauley of Princeton passed away on Wednesday, December 11, 2019 at Perry Memorial Hospital. Tatty was born on January 2, 1925 in Bushnell, IL to the late Leslie and Fawn (Baumann) Monroe. She married the late Larry McCauley on August 23, 1973 at Saint Louis Catholic Church in Princeton, IL. He preceded her in death on October 25, 2006. She attended elementary school at Macomb, Bushnell, Bloomington and Princeton and graduated high school in Clinton, Iowa. She attended nursing school at St. Louis University in St. Louis Missouri, graduating with a Bachelor’s of Science in Nursing (BSN) and Public Health also attaining her Master’s Degree in Nursing (MSN). After graduating she worked at St. Louis Hospital in St. Louis, MO and then moving to Princeton where she worked at Perry Memorial Hospital as Head Supervisor until her retirement in 1980. She was also in the Army Nurse Corp Reserves during World War II, state side. She was an active member of Saint Louis Catholic Church, a faithful volunteer for mobile meals at Perry Memorial Hospital. She was a member of the Saddle Tramps and a member of the Kewanee, Bradford and Bureau County Saddle Clubs. Tatty loved riding her horses and rode almost daily. She had a great love of the outdoors and enjoyed gardening, all animals, flowers, the sunshine and all things in nature, especially her horses. Tatty was survived by one niece, Kathy Lowe; two great nieces, Stephanie (Adam) Herrig and Alicea Broadwater; two great great nieces, Jessica Broadwater and Brinlee Herrig; all of Marion, Iowa. She is preceded in death by her parents, her husband Larry McCauley, one sister, Bonnie Schutt and one brother-in-law, Richard Schutt. In Lieu of flowers memorials may be directed to Perry Memorial Hospital, Saint Louis Catholic Church or St. Judes. Per Tatty’s wishes, there will be no visitation. Services will be held on Monday, December 16, 2019 at 11:00 a.m. at Saint Louis Catholic Church, Princeton, IL, officiated by Father Daniel Gifford, followed by a graveside services at Oakland Cemetery. Online condolences may be left at www.norbergfh.com Arrangements by Norberg Memorial Home, Inc. & Monuments.

The family of Kathryn "Tatty" C Monroe-McCauley created this Life Tributes page to make it easy to share your memories.

Send flowers to the Monroe-McCauley family.