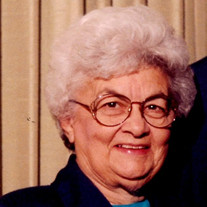 Neponset – Kathryn Nadine (Gunning) Stetson, 93, passed away Monday, June 25, 2018 at Aperion Care of Princeton, IL. Kathryn was born on January 3, 1925, the daughter of Hazel M. (Lyle) and Robert M. Gunning of Neponset, IL. She Attended Neponset Schools and later worked at The Whaples and Farming State Bank in Neponset. As a young girl, she was an accomplished pianist and taught piano to students, her peers, and in later years, her children. She played in many eight-piano recitals. She married Donald S. Stetson on May 25, 1945. Kathryn was a part of the Congregational Church Daughters of Yolada, baking pies and contributing many dishes to the chicken pie suppers and other church events. She served as church organist for many years. She was an active member of the Neponset PTA and was room mother for many years making cookies and other goodies for her children’s classes and other school functions. She was a member of the Neponset American Legion Auxiliary and from her childhood years through her adulthood she placed flags, for Memorial Day services, at each Neponset Veteran’s gravesite at the Floral Hill Cemetery and the West Cemetery. Kathryn was preceded in death by her husband, Don (2004), her daughter-in-law, Sue (Rob) Stetson (2004), and great granddaughter, Kate (Matthew) Nyert (2017). She is survived by her sister, Maxine Kaine of Kewanee, children: Linda (Sue) of Neponset; Dan (Deb) of Princeton; Barb (George) Kapacinskas of Montgomery, TX; Rob (Lois) of Johnston, IA; Mary (Mike) Nyert of Austin, TX; Patti (Joe) Fahey of Yorkville. She has 10 grandchildren: Aaron and Brian (Dan); Shawn, Megan, Marissa, and Amber (Rob); Matthew and Michelle (Mary); Callie and Cole (Patti) and 13 great grandchildren. A private service will be held at a later date. Memorials may be directed to the American Cancer Society. Online condolences may be left at www.norgergfh.com

The family of Kathryn N Stetson created this Life Tributes page to make it easy to share your memories.

Send flowers to the Stetson family.